After 90 days, Lipperts are settling into Seoul

After 90 days, Lipperts are settling into Seoul 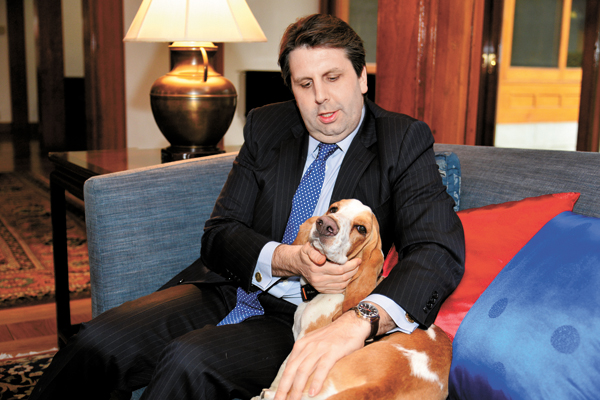 U.S. Ambassador to Seoul Mark Lippert with his dog Grigsby at his official residence, Habib House, in central Seoul. Provided by the embassy

U.S. Ambassador Mark Lippert describes his role as top American envoy to Seoul as that of a “careful steward” in areas including security, economics and diplomacy, and says his goal is to become “a bridge between the government, people, cultures and our countries.”

On Thursday, Lippert sat down for an interview with reporters from the three English-language newspapers in Korea to describe how he has settled into his first ambassadorial post over the past 90 days.

Two days earlier, he was interviewed by foreign affairs reporters from Korean newspapers.

On Thursday, he underscored that the level of trust between the United States and Korea is “very high,” and that “perhaps the best example is the United States’ strong support of [Korean President Park Geun-hye’s] initiatives toward inter-Korean dialogue.”

The ambassador continued, “North Korea poses a serious threat to the United States of America as several defense secretaries and intelligence communities have outlined.” But Washington “believes strongly in the ability of President Park and her government” to handle inter-Korean affairs.

“The relationship is strong, the popularity is high both here in Korea and in the U.S., there are great things happening across a range of fronts,” Lippert said at his residence, Habib House, in central Seoul. “So as the ambassador, you want to be a careful steward of all of these different facets of the relationship to keep them pointed in the right direction and very much on track.”

With his arrival to Seoul three months ago, Lippert broke a lot of firsts as U.S. ambassador to Korea.

At 41, he is the youngest top American envoy to Seoul.

He and his wife Robyn welcomed the birth of a son in Seoul just two weeks ago, and gave the boy a Korean middle name, Sejun, which was decided by a saju fortune teller.

He is also the first political appointee to the post, coming from a non-diplomatic background.

Lippert has a defense background and is a Navy veteran who previously served as chief of staff to U.S. Secretary of Defense Chuck Hagel.

Through his military background, he said, “On day one, I showed up here with a lot of very good friends in the military and the defense sector,” relations that a state department official traditionally wouldn’t have.

He pointed out that he and Gen. Curtis Scaparrotti, top commander of United States Forces Korea, worked together in the Pentagon during Lippert’s days as assistant secretary of defense for Asia and Pacific Security Affairs.

Even before his arrival, there was buzz in the Korean media because Lippert, who had served as senior foreign policy adviser to President Barack Obama during the 2008 presidential campaign, was said to be good friends and basketball buddies with the president.

Lippert also has accrued over 1,000 Twitter followers since he arrived in Korea on Oct. 30, and regularly updates his English and Korean blog titled “The Lipperts in Korea.”

He said he uses social media tools “to take advantage of the different outlets to communicate with a number of Korean citizens that one probably wouldn’t get the opportunity to talk with.”

Grigsby, the Lipperts’ friendly brown-and-white basset hound, has become a diplomatic star in his own right, with nearly 500 followers on his own Twitter account. The dark horse canine envoy makes regular public appearances alongside the U.S. ambassador.

Reading to Sejun in the morning and evening, encouraging lots of communication and playing music are some of the methods the Lipperts are using.

The Lipperts also have recruited a Korean nanny who speaks to the newborn in Korean. He pointed, out, “We felt that was an important part of his development so that he can have an early exposure to language.”

But as a new parent, he added, “It’s a work in progress… I think we are mindful that kids need to be well-rounded and need to have fun.”

Lippert also has been learning Korean over the past four months, throwing Korean phrases casually into conversation. He previously studied Mandarin at Beijing University.

“Korean, it’s a language that… gets progressively harder,” said Lippert. He said the Korean alphabet and grammar “are logical, but complex.”

In comparison, he said, “I think the hardest part about Chinese is all at the front end. You have to learn all the characters and the tones right up front.”

Lippert also touched on some pressing regional issues such as Washington’s call for the verifiable, irreversible, complete denuclearization of the Korean Peninsula and the dynamic relationship of cooperation and rivalry between the United States and China.

Aside from his diplomatic tasks, Lippert said, “We really want to go and see all the Uncesco world heritage sites here in Korea. That’s one of our top goals.”

Earlier in the month, he visited the Andong Hahoe Folk Village, a Unesco World Heritage site in North Gyeongsang that dates to the Joseon Dynasty. He also engaged with youths in the region by advising university students at Andong National University and playing ball at Youngmyung School for special needs children.

“One of my goals is to really engage with the Korean people on a range of levels and through a range of forums.” But he added that “limited time” was his biggest challenge.