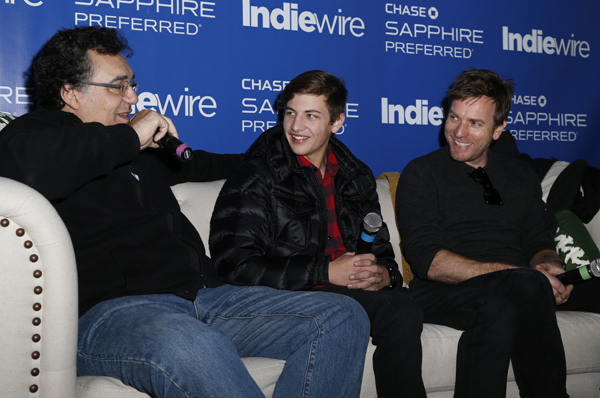 Director Rodrigo Garcia, left, talks about the film “Last Days in the Desert” with Tye Sheridan, center, and Ewan McGregor during the 2015 Sundance Film Festival on Jan. 25, in Park City, Utah. [AP/NEWSIS]

PARK CITY, Utah - Epic is not usually a term associated with films coming out of the Sundance Film Festival, which makes director Rodrigo Garcia’s imagined story of Jesus’s journey through the desert even more striking.

Shot by “Gravity” and “Birdman” cinematographer Emmanuel Lubezki in Southern California’s Anza-Borrego Desert State Park and aided by a precise and all-encompassing Dolby Atmos sound mix, “Last Days in the Desert” looks, feels and sounds big. How could a story of that takes on both Jesus and the devil (both played by Ewan McGregor) and their relationship to God not be? But for Garcia, it’s just a small family drama.

In the film, Jesus comes across a family living in the middle of the desert and becomes involved in their lives for a brief time. The mother (Ayelet Zurer) is dying, the father (Ciaran Hinds) is a stoic isolationist and the son (Tye Sheridan) longs to leave for a life in Jerusalem.

“The desert is a big setting, but the story is super interpersonal about these relationships,” Garcia said. “In some ways it is a kitchen sink drama, even if one of the dads is God.”

Garcia thought of shooting in Israel, but for various reasons, including costs, it just wasn’t going to be feasible for the production. “I didn’t want it to look like an American western desert, the way Colorado and Utah look,” he said.

After hours of exhaustive online searches, he stumbled across the almost alien landscapes of the Anza-Borrego Desert State Park and knew he had it.

In addition to Lubezki’s striking cinematography, the desert world is made more real through sound.

“There’s very little music and almost no dialogue in the first part of the movie. It presented a lot of great opportunities for creative sound design,” said Dolby Institute director Glenn Kiser. The film was remixed with the system thanks to a grant from the Dolby Family Sound Fellowship.

But a small character drama like “Last Days in the Desert” lives and dies by its lead. Garcia knew that McGregor had the right combination of intelligence, compassion and empathy to portray Jesus and the devil.

“It’s quite an extraordinary situation to be playing two roles in any film. It’s quite daunting when one of them is Jesus,” said McGregor following Sunday’s premiere of the film.

But Garcia also knew that he would eventually have to explain why he cast a white actor in the role.

“I am sensitive to the fact that so many times and in many egregious ways white actors have played non-white characters. But I felt like I could take that liberty because I was not doing the historical Jesus, I was not doing a divine Jesus. I was doing a parable,” he said.

“I understand the question. I can only put myself at the mercy of the court.”