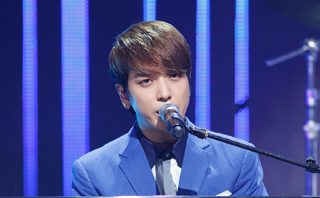 Billboard.com ran a story about Jung’s feat and wrote “‘One Fine Day’ replaces ‘Base’ by Shinee member Jonghyun who ruled the top slot last week.”

Billboard’s World Albums chart ranks musicians mainly based on their album sales, and Jung’s first solo album released on Jan. 20 ranked first on the iTunes charts in seven countries including Hong Kong, Singapore, Thailand, Taiwan and the Philippines upon its release.

Jung’s first solo album includes 10 tracks and, all the songs were written and composed by the 26-year-old singer.

Although Jung debuted in 2009 as a singer, it was his first solo album.

In order to produce a quality album, Jung said he’s been working on the album for a long time. He collaborated with musicians such as American Peter Malick and Singaporean singer JJ Lin.

Jung’s title track for his solo album is “One Fine Day,” but he also produced a music video for another track, “Checkmate,” and he starred in the music video along with JJ Lin. It was unveiled to the public on Saturday.

Jung is also enjoying a successful career in acting. He recently appeared in the period film “The Three Musketeers” along with actors Lee Jin-wook and Yang Dong-geun.