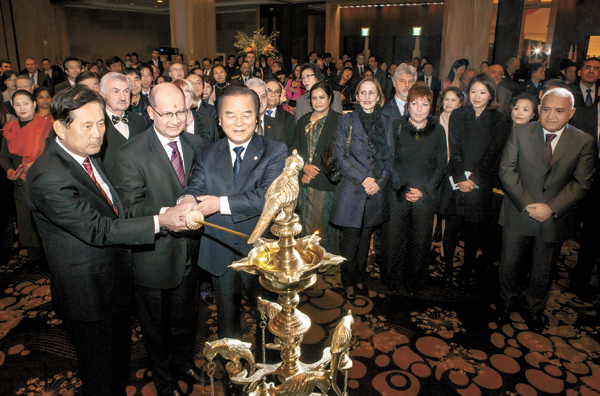 The Embassy of India last week commemorated the country’s 66th Republic Day with an event at the Millennium Seoul Hilton in Jung District, central Seoul, which was attended by approximately 400 people.

Republic Day commemorates the adoption of India’s constitution and is one of the three national holidays celebrated in the South Asian country, along with the Independence Day on Aug. 15, and Gandhi Jayanti on Oct. 2.

He also highlighted key diplomatic steps during the past year to strengthen ties between India and Korea, such as President Park Geun-hye’s state visit in January.

Prakash also noted the plan by the Korea Trade-Investment Promotion Agency (Kotra) to establish Korea’s first industrial park in India, in the state of Rajasthan, adding that he was pushing ahead with organizing Modi’s state visit to Korea later this year.

“The past three years working in Korea were three great years - and the best three years of my life,” he said. “I feel like [it has only been] three months” since landing here.

Jeong Kab-yoon, the National Assembly vice speaker who participated as an honorary guest, said India is Korea’s “friend and strategic partner,” and the brotherhood “was strengthened while Ambassador Prakash was stationed here.”

Hanging on the wall behind the podium was a photograph of President Park shaking hands with Modi during their trip to Myanmar last November for the 25th Association of Southeast Asian Nations (Asean) Summit.

At the front of the banquet hall flanking the podium were several acrylic and oil paintings depicting Indian culture and society, all of which were provided by the Indian Art Museum in Seocho District, southern Seoul.

Artists at the Indian Cultural Center, all dressed in traditional attire, provided entertainment for the international crowd with music and dance performances.

Koreans wearing hanbok, or traditional Korean clothing, took to the stage later to dance and sing with their Indian counterparts.