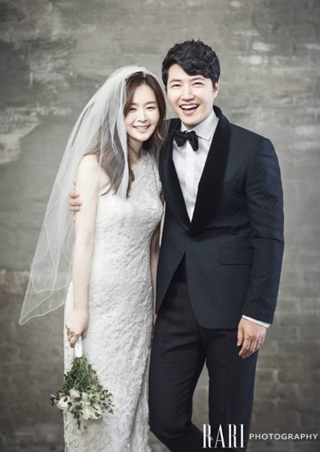 Wedding photos of actor Yoon Sang-hyun and singer-composer Maybee were unveiled on Saturday.

In a series of photos that were uploaded by a wedding photo studio, the two hold hands tightly.

Many soon-to-wed couples take such photos before their weddings in Korea.

The two will get married on Feb. 8 and the wedding ceremony will be open only to relatives and close friends.

Yoon recently said on the talk show “Healing Camp” that he first met his fiancee through a blind date set up by one of his friends. The actor found that he and his fiancee had many things in common and he eventually popped the question less than five months after their first encounter.

Meanwhile, Maybee has been working as a singer and lyricist. She wrote lyrics for songs like sexy diva Lee Hyo-ri’s “10 Minute” and she also debuted as a singer in 2006.