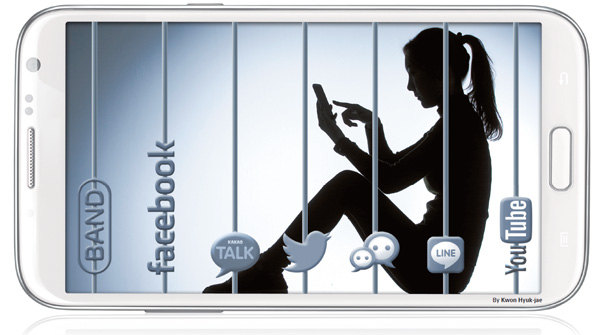 Mr. Lee’s girlfriend gets angry when she hears the sound of his phone go off. She gets annoyed because the company worker, who has been at his job for about three years, immediately checks his cell to see if there is a message from his coworkers or boss whenever it starts to buzz.

Although it means he is sure to get into another fight with his girlfriend, Mr. Lee still checks his phone outside of working hours whenever he hears that alert. He can’t ignore it as he is in a group chat with 12 other coworkers, and any message could include questions he has to answer.

“I think my personal relationships with other people are suffering because of this group chat,” said Mr. Lee.

Ms. Jeon, 24, also can’t seem to escape from her coworkers. The ad agency intern is currently involved in three chat rooms with fellow employees. She says she can’t leave even when the reason for starting the chat is resolved because she’s an intern and it would reflect badly on her. 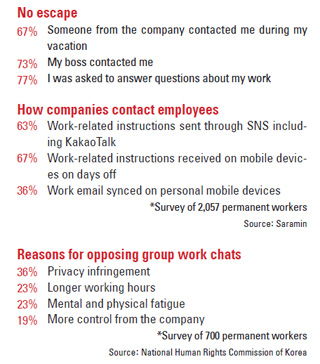 She also has to resist the desire to change the profile photo on her messaging account because her bosses at work might browse through her pictures and ask her if she has a new boyfriend or if she has been somewhere nice.

“I feel suffocated,” she said.

Many Koreans working at companies feel shackled by their mobile phones. They find it difficult to leave the office behind due to the endless work-related chats that come through their messenger services. Most office workers, including Jeon and Lee, know that their peers carry their phones at all times, so they can never completely log out of work after getting up from their desks.

Office workers in Korea started to use online messengers at work after Microsoft introduced its MSN messenger in 1999. Some then moved to other locally established services such as NateOn in 2002, which was linked with the popular personal blogging website Cyworld.

But when the most widely used mobile messenger in the nation, KakaoTalk, introduced a PC version of its app in July 2013, the distinction between work and life started to blur for company employees in Korea. Users could now log into the same account as their phone app while on a desktop computer. The chat windows synced up, so conversations could be continued on any device.

The ushering in of such a versatile messenger service tore down the wall between messaging services used among coworkers and those used among friends and acquaintances.

But users now have little control over certain social messengers, where they can’t easily separate the information they want to share with friends and keep away from their bosses. Anyone on their chat lists can access the personal information on their profile.

To retain privacy, some people have signed up for non-public messenger apps, such as Naver Band, which only allows users who are invited to link up. But this also failed because they felt pressured to accept invitations to closed groups by higher managers or coworkers to discuss work matters. The messages on that particular chat room would again come through constantly whether they liked it or not.

Recognizing the higher levels of stress suffered by office workers because of these multi-device messenger services, the National Human Rights Commission of Korea conducted a survey to see whether they infringe on the basic rights of workers.

The report, which was published last year, said that 63 percent of salaried workers have received instructions from their bosses through a social network service, while 36 percent have their work email account linked to their personal smartphones.

More than one-third of the employees said that being so easy to get in touch with outside of work feels like an invasion of privacy.

About 25 percent answered that they dislike being forced to be available because it adds more working hours, while another 25 percent said that they get more tired from working on their mobiles.

And even those who don’t have to chat to coworkers on messenger services are still expected to stay in touch via email. As company mailing systems can be installed on a personal smartphone, it means that employees are on constant work mode in case any emails come through.

Mr. Jeong, a consultant, is one person who feels he has to constantly check his email account, which is synced to his mobile phone.

“There are mostly emails targeting the entire group, but I can’t not pay attention,” said Mr. Jeong. “Because [senders] can see whether I checked the email or not, I would feel left out if I was not updated with what’s being announced.”

David Lewis, a professor at the University of Leeds who specializes in neuroscience, conducted research on 2,000 office workers in the United Kingdom last year. According to the results, about 70 percent said they had received a message or a call from their bosses on days off. Lewis said employees feel more stress when they are contacted by work when they are supposed to be off than if they went bungee jumping or got into a fight with their spouses.

Saramin, one of the largest recruitment websites in Korea, also surveyed 2,057 salaried workers in Korea last year. More than 67 percent said they had been contacted by work during vacation. The people who got in touch with them were mostly their bosses.

Because of the dissatisfaction and discomfort felt by employers, countries in Europe have taken initiatives to ensure salaried workers are free from working after they leave their desks. An association in France that represents business leaders and labor unions have made it a regulation for some workers in engineering or consulting companies to be free from answering emails between 6 p.m. and 9 a.m.

In Germany, there is a movement to legislate an “anti-stress” law that prohibits emails from being delivered out of work hours. The country’s carmakers BMW and Volkswagen have a policy in place to ensure that no one contacts coworkers after hours except in the case of an emergency.

Mercedes-Benz’s mother company Daimler has adopted a new system since last year where an email that goes into the account of an employee who is on vacation will be automatically deleted and will not be delivered.

The local offices of multinational groups or companies based outside of Korea have also been providing a relatively better work environment to their employees than local companies. An employee at a U.S.-based chemical company says their phone never goes off even when there is an open chat room with a CEO and other workers.

“Employees don’t reply during off-work hours even when someone tries to reach them,” said the 27-year-old Gu. “There is no disadvantage to such behavior.”

Some argue that having smart and mobile devices that were developed to make life more efficient actually harms people’s productivity.

Professor Leslie Perlow at the Harvard Business School held an experiment using employees at Boston Consulting Group in 2012. She had employees stay away from their work phones after 6 p.m. just one day every week. The participants were twice as motivated than people who were not in the experiment. The professor also argues in her book, “Sleeping with Your Smartphone,” that employees’ productivity goes up when they are not connected to any digital device.

Andrea Nahles, federal minister of labor and social affairs in Germany said in an interview in December that efficiency goes up for labor workers when they are allowed to enjoy their time off to the fullest.

Even though many complain about constant messages from coworkers, some say they will continue doing it because it is convenient.

“Although frequent messaging bothers me, most of the time it makes things much easier as we can hear opinions from different people at the same time,” said 36-year-old Hwang, a manager at a local conglomerate.

“And we have a definite record of certain things discussed, so it’s more convenient than talking to people on the phone.”

Some also say that they enjoy having chat rooms at work. Since instant messengers are usually installed on a work computer as a result of their use within the office, many use them to talk to their friends during work hours.

For those, KakaoTalk has introduced a new chat window that looks like it is part of Microsoft Excel. It may look like your coworker is working on a spreadsheet, but in reality they could be just talking to friends.