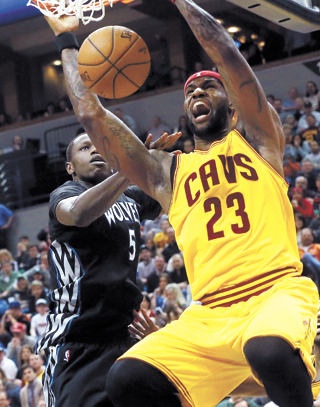 LeBron James dunks in front of Gorgui Dieng of the Timberwolves in the second half of a game on Saturday, local tiime, in Minneapolis. The Cavaliers won 106-90. [AP/NEWSIS]

LeBron James scored 16 of his 36 points in the fourth quarter to win a stirring duel with rookie Andrew Wiggins, leading the Cleveland Cavaliers to a 106-90 victory over the Timberwolves in Kevin Love’s first game back in Minnesota since he was traded.

James kicked things into gear in the final nine minutes. He scored 13 straight points for the Cavs, who have won 10 straight.

Wiggins had 33 points and four steals for the Timberwolves (8-39), who gave Love and the Cavaliers all they could handle in front of a standing-room-only crowd.

Love was booed heavily and finished with 14 points on 6-for-14 shooting and 17 rebounds.

Thaddeus Young scored 19 points and Nikola Pekovic had 14 points and 12 rebounds for the Timberwolves, but they were just 3-for-19 in the fourth quarter.

Trailing by five points early in the fourth, James responded by thundering to the rim for a dunk, hitting a 3-pointer, three free throws and another 3 over Wiggins’ outstretched hand to give the Cavs a 94-87 lead with five minutes to play.

Love was traded to Cleveland in August in the blockbuster deal of the summer, bringing Wiggins, the No. 1 overall pick, Anthony Bennett and Thaddeus Young to Minnesota. Love made three All-Star teams as a Timberwolves forward, but never made the playoffs. And he drew the fans’ ire by requesting a trade at the end of last season.

But he wanted to come to Cleveland to team with James and chase titles, and now the Cavs are finally starting to play like the team that entered the season as heavy favorites.

Love was booed throughout the game, except for during a brief video tribute in the first quarter highlighting his six seasons in Minnesota. Cheers were especially loud when the video touched on his work in the community that included a coat drive that supplied thousands of winter coats to the needy.

When the video was over, so was the goodwill. Every touch of the ball was booed. Every missed shot was cheered as loudly as a Wiggins dunk, of which where were plenty.

Wiggins gave James everything he had, hitting him with a beauty of an up-and-under in the post and out-running him to a loose ball and throwing down a dunk to get a rare sellout crowd roaring. His 3-pointer in Tristan Thompson’s face brought the Wolves within two late in the first half.

Wiggins had 23 points on 10-for-15 shooting in the first half. Injuries to Mo Williams (hip), Zach LaVine (ankle) and Ricky Rubio (ankle) left the Wolves with just one healthy point guard in Lorenzo Brown, who signed a 10-day contract on Wednesday. Brown had a point and nine assists.