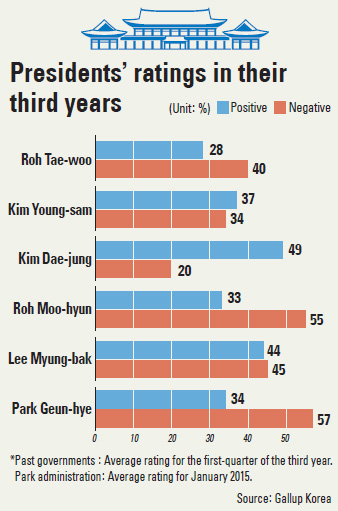 Threatened by the plummeting approval rating of President Park Geun-hye, the Blue House and cabinet held an emergency meeting Sunday and decided to create a routine conference to coordinate and review government policies.

The emergency meeting was held on Sunday as criticisms snowballed that the Park administration has failed to properly coordinate its policies on income taxes and health insurance issues. The approval rating of Park rapidly plunged over the recent weeks, and a survey released last week showed that only 29 percent of the public are supportive of her performance.

The Health and Welfare Ministry said last week it will drop a plan to overhaul the national health insurance program to fix problems with how premiums are charged, prompting concerns that the decision was political and made under pressure from the Blue House despite a genuine need for reform. Although the government said it will further review the plan, analysts said the Park administration was kicking the issue down the road for the next government to deal with because it is too politically risky.

A similar reform of the income tax code made in late 2013 has recently backfired big time on the administration.

Outgoing Prime Minister Chung Hong-won and Presidential Chief of Staff Kim Ki-choon did not attend the conference on Sunday.

Following the emergency Sunday meeting, the cabinet and the Blue House decided to create a new routine to coordinate policies, Hyun said in a briefing. From the administration, deputy prime ministers for economic and social affairs, the minister of government policy coordination and concerned ministers will attend a regular meeting. From the Blue House, the senior secretary for policy coordination, senior secretaries for public and economic affairs and other concerned aides will also join.

While top aides agreed that the policy coordination conference will take place “frequently,” Hyun elaborated that the meeting will probably have to take place “a couple of times a month.”

The Blue House meeting’s counterpart will be a vice-ministerial meeting of the cabinet, hosted by the minister of government policy coordination.

“Based on this strengthened policy coordination system, the government will push forward the three-year economic reform road map and other reform agendas including the reform of the civil servants’ pensions,” said Choo, minister of government policy coordination. “We will try to remove inconsistencies between ministries and prevent inconvenience for the public.”

In addition to the strengthened coordination between the Blue House and the cabinet, improving communication with the ruling party is also a priority, Hyun said. More measures will be discussed after the Saenuri Party selects its new floor leader and chief policymaker on Monday, he added.

Last month, Park nominated Lee Wan-koo, floor leader of the ruling party, as her new prime minister in a bid to turn around the plummeting popularity of her administration.

Gallup Korea announced Friday that Park’s approval rating plummeted to the lowest-ever 29 percent in the latest survey. On Tuesday, Realmeter also said her approval rating went down to 29.7 percent.

In the first week of January, President Park’s performance was viewed positively by 40 percent, but the rating went down to 35 percent, 30 percent and then 29 percent in the weeks to follow. Negative evaluations of the president went up from 51 percent to 63 percent.

When compared to the past presidents, Park’s ratings are now the worst for this stage of the term. During the first quarter of the third year, President Kim Young-sam recorded an average of 37 percent approval rating. President Kim Dae-jung was backed by 49 percent during the same period in his presidency. President Roh Moo-hyun had 33 percent approval and President Lee Myung-bak 44 percent, Gallup Korea polls showed.

The recent scandal over a leaked Blue House document and alleged power struggle among Park’s confidants, her poor performance at a New Year’s news conference and the people’s frustration over tax bills for 2014 rising - when Park’s government assured them they wouldn’t - were possible reasons behind the plummeting approval rating.

But analysts say the current situation is uniquely volatile. They said Park’s approval rating was around 50 percent even when the government was condemned for its botched attempts to rescue the passengers from the sinking Sewol ferry in April.

“You can’t count on the precedents to read the current situation,” Kim Hyung-joon, a political science professor at Myongji University, told the JoongAng Sunday. “This is more complex and it is a structural problem.”

Park has had it fairly easy compared to her predecessor. Lee started his term in 2008 with approval ratings around 20 percent due to fierce public protests of his decision to reopen Korea’s beef market to American imports.

The ruling party also remained relatively united in backing her. During the Roh Moo-hyun presidency, Roh agreed to an independent counsel probe into the allegation that the Kim Dae-jung administration had paid money for the first-ever inter-Korean summit, largely losing his supporters in the Jeolla region.

In the case of Lee, his grip on power was affected because Park and her loyalists protested his plan to revise the Sejong City relocation project.

Park also does not have a strong opposition party.

“The people’s rage was building but the president misjudged the situation,” Kang Won-taek, a political science professor at Seoul National University, said. “Although there were factors that should have driven down her ratings, such as the Sewol ferry disaster and controversial appointments, the numbers stayed up. So the president became arrogant, believing she can do anything, and it became a poison.”

Only President Kim Dae-jung managed to turn around his ratings once they went below 50 percent by holding the first inter-Korean summit. In the case of the Lee administration, the approval rating was around 20 percent when he started the term, but went up to 40 percent in his third year. “Whether it is tax or health insurance reform, the time has come for the president to take matters into her hands,” Kang said. “Only communicating directly with the president will calm the people.”