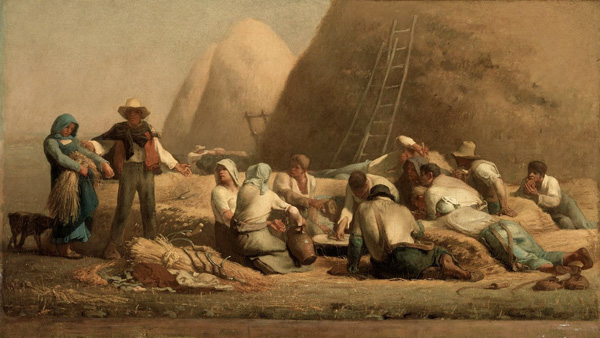 “Harvesters Resting (Ruth and Boaz)” (1850-53) is one of the highlights of the “Millet, Barbizon & Fontainebleau” exhibition at Seoul Olympic Museum of Art in southeastern Seoul. Provided by the museum

The ongoing “Millet, Barbizon & Fontainebleau” in Seoul is shedding new light on Jean-Francois Millet (1814-75) and his influence on the start of modernism.

The exhibition is visiting from the Museum of Fine Arts, Boston, which has the world’s largest collection of Millet paintings - about 170 pieces.

The show was created last year to celebrate the 200th anniversary of the artist’s birth. It took four years of research and has now traveled to the Seoul Olympic Museum of Art, or SOMA, inside Olympic Park in southeastern Seoul.

It features 25 pieces by Millet and another 39 works by related artists, including early paintings by Impressionist painter Claude Monet. 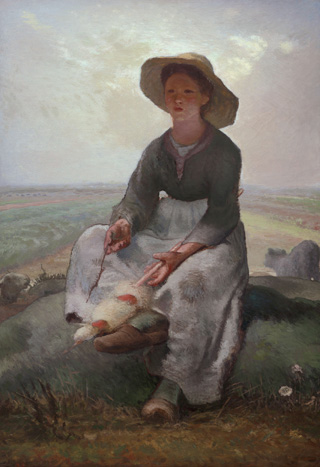 “Young Shepherdess” (1870-73), right, is regarded as one of Jean Francois Millet’s masterpieces. Provided by the museum

All of the art on display is from the museum in Boston.

According to Kim Ji-ye, the Seoul exhibition’s curator, Millet was one of the leading Pleinairist painters, who loved to take their easels outside to create art.

Instead of acquiring traditional painting techniques from their predecessors, the Pleinairists ignited the beginning of modern art history through their use of realism, which is what the exhibition mainly details.

The Barbizon school of painters, including Millet, were eminent among the Pleinairists.

Among the highlights of the exhibition are “Harvesters Resting (Ruth and Boaz)” (1850-53), which is arguably one of Millet’s most ravishing pieces. As the double title connotes, Millet painted a serene moment among peasants with a biblical interpretation.

“The reinterpreted scene from the Old Testament, the book of Ruth, shows how Millet meticulously calculated composition to evoke coziness,” said Kim.

The painting is enchanting with its impeccable depictions of light.

According to the curator, Millet was an inspiration for Impressionists such as Vincent van Gogh.

This is shown in the way Millet captures breathtaking scenic views with his particular use of light on his canvas.

The sky in his masterpieces “Young Shepherdess” (1870-73) and “Washerwomen” (1855) imply a new age of art with his use of light and the way it shines exquisitely on the subjects within the pieces.

“These paintings exude solemn atmospheres along with his other pieces because his technique was completed by depicting lights,” Kim added.

Millet infused life into the subject with this use of light, a technique that is now emblematic of the birth of realism.

Although Millet is the center of the exhibition, pieces by renowned artists of the Barbizon school, including Theodore Rousseau (1812-67) and the early art work of Claude Monet (1840-1926), are on display as well.

“Gathering Wood in the Forest of Fontainebleau” (around 1850-60) by Rousseau and “Wood Gatherers at the Edge of the Forest” (1863) by Monet have a peaceful ambience despite the fact that collecting wood was prohibited at the time.

“The painters express the peasants’ arduous lives behind the beautiful and tranquil painting,” the curator explained. “Another reason why the theme of the exhibition is the first step toward modernism is that the artists began to entail a satirical message within the landscape,” Kim added.

On the whole, the exhibition allows viewers to witness a transformation from tradition to modern art, and allows them to see the start of Impressionism.