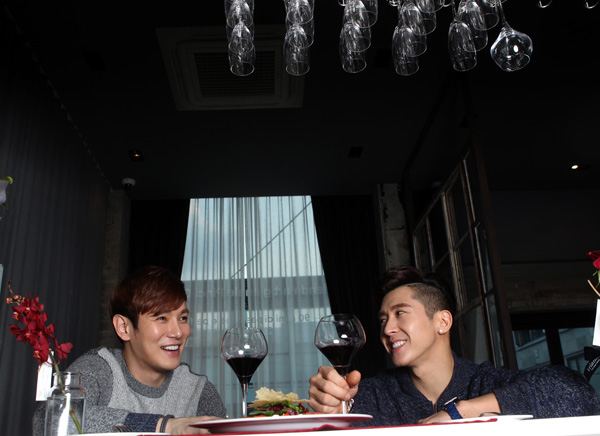 Hwanhee, left, and Brian of Fly to the Sky at Pinci Lounge in Apgujeong-dong, southern Seoul. By Jung Si-jong

The tight bromance between Fly to the Sky’s Brian and Hwanhee has lasted for around 15 years, even though rumors are constantly flying that the two regularly clash with one another.

But the duo, who debuted together in 1999, have kicked any doubts about their close friendship and partnership to the curb with their latest album “Continuum.”

The two have clearly put all of their efforts into their ninth record, which is also their first in five years.

They even joked that they should simply stop making music if “Continuum” doesn’t get much recognition.

Wrapping up their run of three consecutive concert series since the album was released in May - some of which were collaborations with other singers - the two sat down with Ilgan Sports, an affiliate of the Korea JoongAng Daily, and shared how nervous they were while preparing for the comeback.

Q. Were you more worried or excited about your comeback?

A. Hwanhee: I worried a lot, of course. I even thought we couldn’t be in this industry if we didn’t do well with this comeback album. We told ourselves that we should strive to be in the top 10 of TV programs that rank songs.

Brian: We were joking that we should not ever see each other again if the album failed.

Your song “You You You” was released at midnight. Were you able to sleep at all that day?

Hwanhee: It ranked No. 1 at 1 a.m. We gained confidence right away. I was very nervous wondering whether it would perform well, thinking that all the other idol stars were watching. But after we saw how high we ranked on the music charts, I felt like we could really make it work this time.

Is it true that there were disagreements between you?

Hwanhee: There were a lot of false rumors. There was a rumor that Brian was trying to sign with another agency and that I tried to disband the group. We both believed such rumors [without checking with each other]. There would have been no misunderstandings if we had met up with each other more frequently and talked. People around us also played us against each other.

But have there been more conflicts after the comeback?

Hwanhee: We don’t really have a reason to fight. We know each other very well so we don’t clash. Both of our families come when we perform in concert, and now we even know each other’s aunts. Because we know each other so well, we just don’t do something that the other person might hate.

There are many K-pop groups that break up or have conflicts with their agencies. Do you have any advice for them?

Hwanhee: There are different opinions, as those singers may think, “Oh, I can make more money when I leave,” and agencies may wonder, “We have worked so hard to make you big, how could you do this to us?” Singers and company officials need to talk much more.

Brian: Where you live and how you behave is really important. When you are a trainee, you need to know one another. But after a year or two, it is better for group members to live separately.

When you live under the same roof, you sometimes see a lot of the other person’s bad habits. When you live apart, you miss the times you lived together.

Brian, do you think you work more like a subvocalist in the group and try to do more entertainment shows as a result?

It worked so well that major broadcasting stations wanted to have us on their shows. But I think Fly to the Sky shines when both of us are together. I like singing without too much technique while Hwanhee is the opposite. We have very different styles. I can’t do what Hwanhee does and he can’t sing like I do.

How do you feel about your style of singing, Hwanhee?

Hwanhee: How I sing is not so trendy. I think I did change it a little, but it would be unnatural to change my style all at once. I think one or two songs that stand out because of my style could be necessary as there are fans who like it.