[NEW ARRIVALS] The Demographic Cliff: How to Survive and Prosper During the Great Deflation of 2014-2019

[NEW ARRIVALS] The Demographic Cliff: How to Survive and Prosper During the Great Deflation of 2014-2019 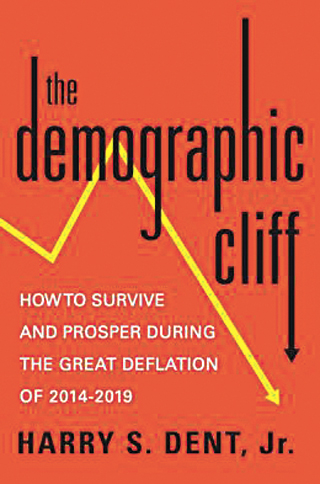 Throughout his long career as an economic forecaster, Harry Dent has relied on a not-so-secret weapon: demographics. Studying the predictable things people do as they age is the ultimate tool for understanding trends. For instance, Dent can tell a client exactly when people will spend the most on potato chips. And he can explain why our economy has risen and fallen with the peak spending of generations, and why we now face a growing demographic cliff with the accelerating retirement of the Baby Boomers around the world.

But now, Dent argues, the fundamental demographics have turned against the United States and will hit more countries ahead. Inflation rises when a larger-than-usual block of younger people enter the workforce, and it wanes when large numbers of older people retire, downsize their homes, and cut their spending. The mass retirement of the Boomers won’t just hold back inflation; it and massive debt deleveraging will actually cause deflation-weakening the economy the most from 2014 into 2019.