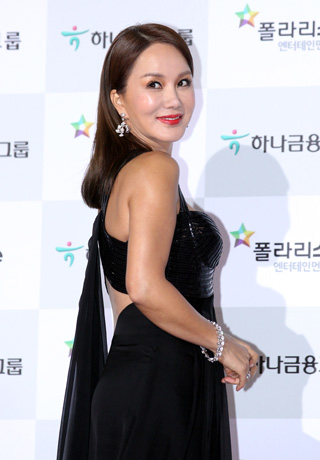 Singer-actress Uhm Jung-hwa is set to work on a new mini-album.

According to multiple music industry insiders on Monday, the 46-year-old, who is often dubbed Korea’s answer to Madonna, recently signed a contract with Mystic Entertainment in order to prepare for a new album.

Uhm’s current agency is Sim Entertainment, but since it mostly represents actors and actresses, Uhm decided to join forces with Mystic Entertainment, home to musicians like Yoon Jong-shin and Kim Yeon-woo.

If Uhm releases her new mini-album in June as scheduled, it will be her first in seven years.

Uhm first debuted in the entertainment industry as an actress in 1992, but she released an album a year later. Her debut “Pupil” instantly became a huge hit.

Since then, she has been leading a successful career in both singing and acting, but after her 2008 album “D.I.S.C.O.,” she’s focused more on her acting career.

Uhm has been away from the music scene for a long time, but she proved her presence on the stage once again when she appeared in a recent special episode of the popular reality TV show “Infinite Challenge,” in which singers from the 1990s got together and performed their hits.

Uhm paired up with male duo Jinusean and sang “Tell Me” in the special episode.

The singer-actress recently starred in the film “Venus Talk” (2013).