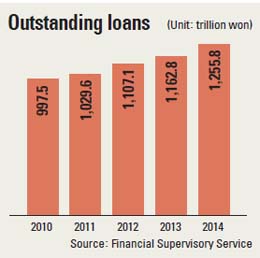 The outstanding balance of loans issued by Korean banks stood at 1,255 trillion won ($1.13 trillion) at the end of December, jumping 93 trillion won, or 0.3 percent, from a year earlier, data from the Financial Supervisory Service (FSS) showed Monday.

The year-on-year growth is the largest since a 115 trillion won increase in 2008, a reminder of the impact of the global financial crisis on Korea.

Household loans rose largely because of a 37.3 trillion won increase in mortgages for the year. Demand for mortgages strengthened significantly after the government eased the debt-to-income and loan-to-value ratios for mortgages to boost home sales. In addition, interest rates of 2 percent, the lowest since 2009, stimulated buying.

At the five major commercial banks, the loan balance at the end of last year was 784 trillion won, up 48 trillion won from 2013. Loan issuances by all banks grew 7.7 percent in the first 11 months of 2014, data showed.

Some in the financial industry are concerned about a repeat of 2008 when banks competed to make loans, which led to sharp declines in net profit.

For the first three quarters of last year, the ROA of domestic banks was 0.37 percent and the ROE 3.91 percent.
Despite the growth of the balance, the delinquency rate of domestic banks’ won-denominated loans in 2014 was 0.64 percent, down slightly from 0.76 percent a year earlier.

“The delinquency rate has been improving since 2012,” said Choi Sung-il, director general of bank supervision at the FSS. “But due to the slow economic recovery, there needs to be continued monitoring for possible deterioration in corporate finances and rapid household debt growth.”

Some analysts, however, are voicing concern about the growth of outstanding loans.

“If loan issuances rapidly increase, that starts to affect banks two years later,” said Suh Byung-ho, a researcher at the Korea Institute of Finance. “That can have a serious impact on banks’ financial health, because since 2008 their health has been weakening.”

“It is difficult for banks to curb loan issuances at a time when the government is promotion new loans,” said an anonymous banker. “Banks are making efforts on their own to try to minimize the possibility of loans turning sour.”