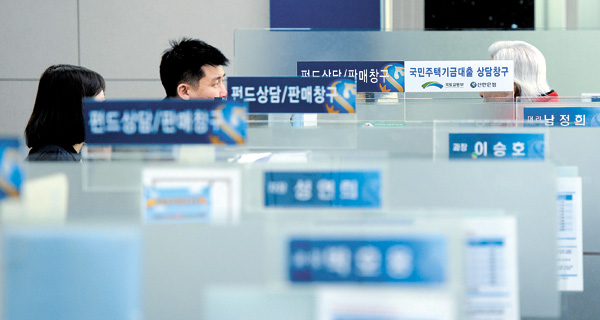 Customers get advised on deposit and installment savings products by an employee of Shinhan Bank on Monday. The bank’s interest rates fell below 2 percent amid the government’s protracted low interest rate policy. [NEWSIS]

Starting with Shinhan Bank and Woori Bank in January, major commercial banks lowered interest rates on one-year deposit accounts. Shinhan not only cut the rate for its flagship time deposit, dubbed “S Dream,” but rates for other installment savings products. The annual rate for S Dream was 2 percent before the bank adjusted it to 1.9 percent.

“It is the first time interest rates for time deposits and installment savings have fallen below 2 percent,” said an official at Shinhan Bank.

Woori Bank also cut its rates for all fixed deposit products to 1.9 percent on Jan. 19. 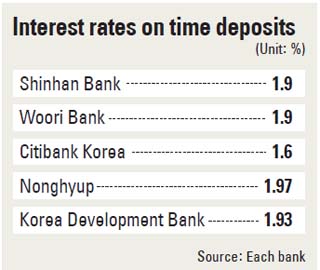 Now that Shinhan and Woori have set their rates below 2 percent, other commercial banks might follow suit.

Kookmin Bank and Hana Bank are expected to cut their rates soon, according to the financial industry sources.

“It has been more than three months since the Bank of Korea set the benchmark interest rate at 2 percent,” said a vice president of a commercial bank. “It is understandable that consumers will be
disappointed, but the overall market interest rate is at an all-time low and as the government is trying to curb loan interest, it is only natural rates on deposits to be lowered.”

Putting 50 million won ($45,300) in a fixed deposit with an interest rate of 1.9 percent for a year will produce income of about 790,000 won after excluding a 15.4 percent tax on interest income and 1.4 percent residential tax. The depositor gets just a 1.5 percent return after taxes.

Because the low interest rate policy is expected to be maintained for the time being, interest rates for both deposits and loans are going down.

The average rate for profit-sharing mortgages, which have been promoted by the government to get more people to buy houses, will started to be issued starting March 1 with 1 percent annual interest rates.

At a time of high jeonse (a lump sum two-year housing lease) or two-year housing lease prices, the government is encouraging people to purchase houses with cheaper mortgages developed with the intention of reviving the depressed housing market, a key area for the normalization of the economy.

The profit-sharing mortgage program is to let banks provide the cheapest-ever mortgages and share profits if home prices increase in the future.

Despite the low interest rates, Koreans are finding no other options for setting aside their money. As of November, the total deposit balance at domestic banks stood at 1,075 trillion won, increasing by 65 trillion won, or 6.5 percent, from a year earlier.

Even in the second-tier financial industry, savings banks are moving to lower their interest rates. The average rate of savings banks was 2.76 percent last year.

“All interest rates both in the short term and long term are falling, making it harder for consumers to find high-yield financial products,” said Lee Jun-hyup, head of macroeconomics at Hyundai Research Institute. “Not only businesses, but also households are having a hard time making investments.”