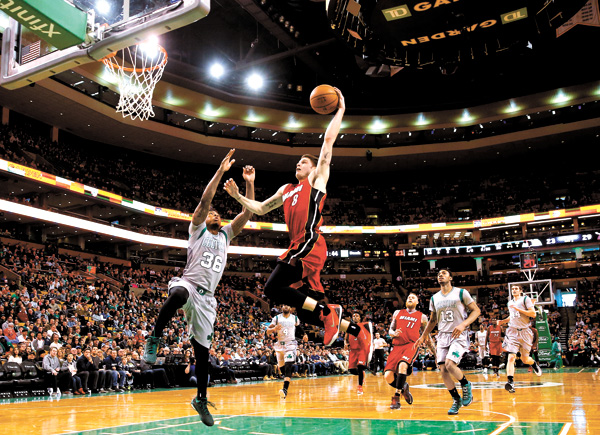 Tyler Johnson, right, of the Miami Heat drives to the basket against Marcus Smart of the Boston Celtics during the first half of an NBA game in Boston on Sunday, local time.[AP/NEWSIS]

Hassan Whiteside was hardly shocked when Miami Coach Erik Spoelstra designed a play for him late in the third quarter of a tight game.

He was surprised when Spoelstra kept doing it, though.

Whiteside scored half of his 20 points during a dominant stretch spanning the third and fourth quarters to help the Miami Heat stave off Boston’s rally and snap a two-game slide with an 83-75 victory over the Celtics on Sunday.

“He drew up a play and I scored on it. He just kept drawing them up,’’ said Whiteside, who went 10-for-17 from the field with nine rebounds and three blocked shots. “I really think he started believing I can make plays down there.’’

Wade missed his second game in a row with a strained right hamstring, while Deng sat out his third straight with a strained calf. Wade, who injured himself in Tuesday’s loss to Milwaukee, is averaging 21.4 points and 5.4 assists per game.

Whiteside is more than making up for their absence, though, and Spoelstra isn’t his only supporter.

The 25-year-old has most of Miami in a frenzy following a wild week that included a triple-double and franchise-record 12 blocks last Sunday, and 24 rebounds on Friday.

It’s quite the story for the former castoff who signed with the Heat in November after playing in both Lebanon and China last year.

“He continues to surprise me,’’ Bosh said. “He’s a talented young fellow. We want to continue to push him and encourage him to play and do well.’’

Avery Bradley and Tyler Zeller led the Celtics with 17 points apiece, and Brandon Bass had 15. It was Boston’s third straight loss and fourth in its last five.

“We’ve got to do a better job of finding our pulse at the defensive end regardless of whether the ball is going in the basket or not,’’ said Boston Coach Brad Stevens. “When you miss the number of shots that we missed, I thought we let that affect how much we talked defensively. I could hear the silence and that’s a bad thing.’’

Both teams were coming off their worst shooting performances of the season. Miami was held to a season-low 33.0 percent in a loss to Dallas, while Boston shot 35.6 percent in a setback to Houston.

Neither fared much better Sunday, with Boston shooting 37 percent and Miami 41.6, but Whiteside’s 10-for-17 performance fueled the Heat’s third win in their last seven games.

The suddenly surging 7-foot sensation was relatively quiet for the first two-and-a-half quarters before he began resembling the center who came in averaging 15.3 points and 17.7 rebounds over his previous three games, including a triple-double line of 14 points, 13 rebounds and a franchise-record 12 blocks last Sunday.

After Boston erased a 12-point halftime deficit, tying it at 55 with less than three minutes to play in the third, Whiteside had his way with the young Celtics.

He scored Miami’s final four points of the third and opened the fourth by scoring six straight points, including a pair of long jumpers that restored the Heat’s eight-point cushion.

Spoelstra didn’t seem to mind his big man’s decision to shoot from the perimeter.

“If he’s wide open and they’re disrespecting him and it comes within the flow of what we do, I’m fine with that,’’ he said.