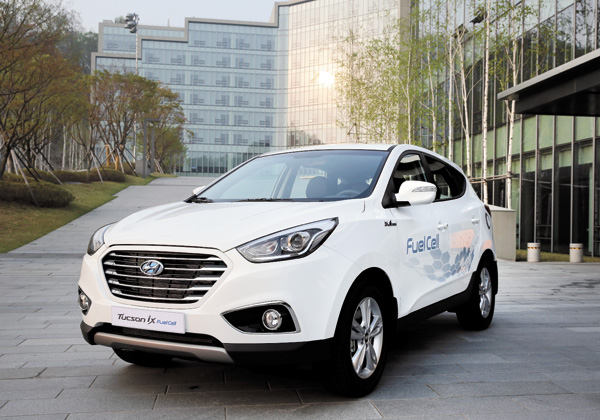 Hyundai Motor’s Tucson ix fuel-cell electric vehicle is displayed in Yongin, Gyeonggi, last May. The Korean automaker has decided to lower the car’s price in Korea in an attempt to solidify its domestic market share against rivals like Toyota.

Hyundai Motor said Monday it will slash the price for its Tucson ix FCEV SUV in Korea by nearly half to strengthen its competitiveness in the fuel-cell electric vehicle segment.

Last year, the government offered 60 million won in subsidies to FCEV buyers, but it hasn’t yet decided on the level for this year.

Industry insiders expect FCEVs, including subsidies, to be available in the 50 million won range. The company added it also might lower th
e price of the Tucson ix overseas.

Hyundai has focused on selling the vehicle to government agencies, both in Korea and overseas, but only about 200 units have been sold, 10 of them in Korea.

Industry insiders said the price cut was necessary because competition in the segment is expected to get tougher. Toyota, for instance, introduced its FCEV sedan Mirai in mid-December at a cost of 6.7 million yen ($57,000) in Japan. Toyota projected it would sell 400 Mirais in t
he first month, but the Japanese automaker already has received 1,500 orders.

“We expect this price cut will help us sell more FCEVs, as it will greatly ease the price burden for consumers willing to buy this unit,” Hyundai Motor said in a statement. “We also expect it will help the nation to improve its overall infrastructure for environmentally friendly cars, including adding more charging stations.”

“January sales decreased a bit from a year ago, mainly due to the slumping economy and tough competition,” said Hyundai Motor in a statement. “We will strengthen our marketing strategies for the domestic market and try to introduce new models consistently.”

The best-selling model for the company in the domestic market was the Sonata sedan, with 6,907 units sold in January, including 1,256 hybrid models. In second place was the Grandeur large sedan (6,513) followed by the Avante (4,357) and Genesis premium sedan (3,268) unit
s.

Kia Motors, Hyundai Motor’s sister company, reported a 1.8 percent year-on-year sales increase in Korea to 36,802 in January, but foreign
sales fell 3.3 percent from a year ago to 215,927 units.

“The Sorento SUV and new Carnival van led sales in the domestic market,” said Kia in a statement.

Other automakers, with the exception of Renault Samsung, also saw domestic sales rise and exports shrink.

Renault Samsung experienced sales increases in both the overseas and domestic markets last month. According to the company, the release of its new SM5 Nova led a domestic sales surge of 27.5 percent year-on-year to 5,739 units in January.

Overseas sales by Renault Samsung skyrocketed 402.5 percent year-on-year to 8,380 units in January, largely thanks to the significant increase in demand for the Nissan Rogue.

But as Chevrolet withdrew from the European market last year, exports shrank 7 percent year-on-year to 39,736 units.

Ssangyong Motor sales in Korea surged 25 percent year-on-year largely thanks to the release of its new Tivoli compact SUV. In just two weeks since it was released in mid-January, it sold more than 2,300 units. It became the best-selling compact SUV, outpacing rivals, including Renault Samsung’s QM3, which sold 1,600 units, and GM Korea’s Trax with 713 units.

The appreciation of the Russian ruble last month affected the Korean SUV maker, whose exports rely heavily on Russia.