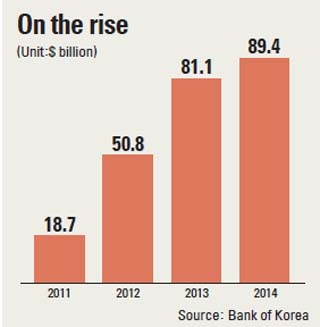 Korea’s current account surplus hit another record in 2014 for the third year in a row.

But what would have been considered an unalloyed triumph in the recent past is actually setting off alarm bells. The record surplus wasn’t the result of a vastly improving or expanding economy, but the opposite.

Additionally, the inflow of U.S. greenbacks resulting from the surplus is expected to further weaken Korea’s export competitiveness by strengthening the value of the won against the dollar.

According to the Bank of Korea on Monday, last year’s current account surplus hit a new record high of $89.4 billion. This was not only larger than the $81.1 billion record set in 2013 but even larger than the $84 billion projected by the central bank earlier last year.

The current account surplus has been hitting yearly records since 2012 when it amounted to 50 billion won ($45 million). The current account balance has seen its second-longest surplus streak since relevant data started being compiled in its current form in 1980.

On a monthly basis, the current account balance has seen surpluses for 34 consecutive months since March 2012. That is just four months shy of the 38-month streak recorded between June 1986 and July 1989.

But the surpluses have grown largely because of the struggling domestic market and falling crude prices.

Exports improved in December compared to the previous month. But while it did make a slight improvement, exports grew 1.7 percent year-on-year to $54 billion. But imports fell 1.7 percent to $45.4 billion.

The situation was even worse in November when exports were down 5 percent but imports saw a sharper drop of 10.4 percent.

The situation has been pretty much the same throughout the year and the economy is still faced with very weak growth prospects. Last month the government released a report showing that the Korean economy barely moved, with industrial output expanding 0.9 percent month-on-month as of December.

Finance Minister Choi Kyung-hwan has realized the potential dangers in the appreciation of the Korean currency and the deterioration of Korean products’ price competitiveness in the global market if the surplus continues to grow.

“If the surplus is too large, it could pressure the won to appreciate against the U.S. dollar,” Choi said during an event hosted by the Korea Chamber of Commerce and Industry on Jan. 26. “We will try to manage the size of the surplus this year to make it smaller than last year’s.”