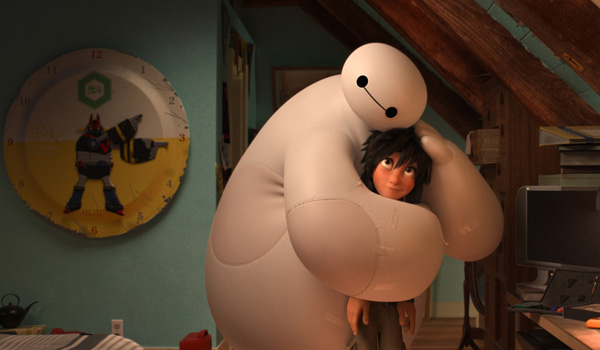 Disney and Marvel’s “Big Hero 6” won the box-office race this weekend in Korea. Baymax, left, and Hiro join forces with four other pals to save their city, San Fransokyo, from a scientific catastrophe. Provided by the distributor

Disney and Marvel’s “Big Hero 6” knocked “Gangnam Blues” out of the way to top the local box office over the weekend, according to the state-run Korean Film Council on Monday.

The protagonist Baymax, a robot that won much adoration from local moviegoers for being “huggable,” managed to attract an audience of 611,399 on Saturday and Sunday, making 4.8 billion won ($4.4 million) in local theaters.

“Big Hero 6,” which is based on one of Marvel’s superhero comics of the same title, is the first collaboration among the two companies since Disney acquired Marvel in 2009.

Set in an imaginary city called San Fransokyo - a bizarre backdrop made up of San Francisco and Tokyo - the film tells the story of how six young heroes, including Baymax and its owner Hiro, save their city from an evil force.

The film, which debuted in second place last week, climbed up the ladder a notch, garnering an audience of 1.7 million people so far in Korea.

In second place was director Yoon Je-kyun’s “Ode to My Father,” stepping up a level from last week’s No. 3 by selling 420,468 tickets during the weekend.

Despite the political controversy it stirred last month over the exaggerated portrayals of the achievements and sacrifices that Korea’s older generation went through during the industrialization era in the 1960s and 1970s, the film is still reigning in the weekend box office almost two months since it opened.

Acclaimed director Yoo Ha’s “Gangnam Blues,” a noir film depicting a series of power struggles that happened in southern Seoul during the 1970s, was spotted in third place.

Gangnam, or southern Seoul, went through a major development plan during that period, turning what was once farmland into one of Korea’s wealthiest districts.

Distributed by Next Entertainment, the film stars Lee Min-ho and Kim Rae-won, two of the nation’s most popular actors. The movie collected 403,422 tickets, adding to its two-week total of 1.7 million.

Based on best-selling author Jung Yu-jeong’s book of the same title, the movie shows new director Mun Che-yong’s attempt to give consolation and encourage a fighting spirit among those suffering in a harsh, competitive society.