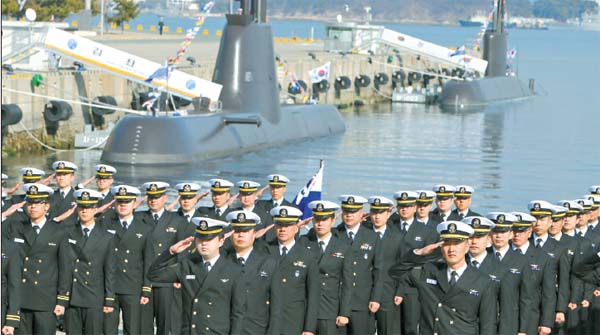 A ceremony to inaugurate the submarine command takes place Monday at Jinhae Naval Base in South Gyeongsang. By Song Bong-geun

Amid intensifying competition in Northeast Asia to bolster underwater military capabilities, the Korean Navy inaugurated its submarine command on Sunday.

According to the Navy, the submarine command is located at Jinhae Naval Base in South Gyeongsang. The command will have its own operational control and oversee education and training of the crews.

Until now, the ninth submarine flotilla, commanded by a rear admiral (lower half) under the Naval Operations Command, was in charge of the country’s submarine operations.

By upgrading the flotilla to an independent command center, the Navy gave it authority equal to the first, second and third fleets. The submarine command will be controlled by a rear admiral (upper half) - one rank higher than before - and Yun Jeong-sang will be the inaugural commander.

“With the establishment of the submarine command, submarines will be able to conduct more flawless operations and receive better logistics support.”

Because of their stealth capabilities and the ability to carry missiles with a range of more than a 1,000 kilometers (about 620 miles), submarines are considered strategic weapons. Korea is the world’s 12th country to design and build its own submarine. However, the country still imports key components including engines and sonar systems.

In 1992, Korea imported its first submarine, a Type 209 vessel produced in Germany. In 1994, it succeeded in domestic production of another Type 209 submarine and more investments were made to bolster the country’s capabilities. The Navy currently has a total of 13 submarines, including four 1,800-ton vessels. An ambitious project to build more is under way. The country is building five more 1,800-ton submarines, which can stay underwater for more than 15 days to carry out a mission.

With an aim to operationally deploy them by 2020, the Navy also started building new, domestically designed 3,000-ton submarines. They will be equipped with vertical launch systems to fire ballistic missiles from underwater, a dramatic increase in Korea’s long-range strike capabilities.

North Korea owns 70 submarines, matching the number operated by global military superpowers such as the United States, China and Russia. But most of the North’s vessels are obsolete.

The North operates about 20 Romeo-class submarines developed by the former Soviet Union in the 1950s as its main capabilities. It also has 40 300-ton shark-class (Sango) submarines and 10 120-ton salmon-class (Yono) submarines, South Korean military authorities said.

Pyongyang, however, recently stepped up its submarine capabilities.

“Signs were seen that the North was trying to install a vertical launch system on its 1,800-ton submarine,” a Navy source said. “It is also pushing forward the development of a new, larger submarine.”

Both Koreas operate conventionally powered diesel-electric submarines, while other military superpowers including the United States and China operate nuclear-powered submarines. Their competition has grown.

The United States, which operates 72 submarines including 58 nuclear-armed strategic vessels, has deployed 60 percent of its naval capabilities to the Pacific, a move to counter China.

China, in addition to its four nuclear submarines, announced a plan to build six more 16,000-ton submarines by 2020. Beijing aimed to arm them with 300 nuclear missiles and 80 inter-continental ballistic missiles.

After South Korea announced a plan to export three submarines to Indonesia in 2011, India and Thailand joined the competition.

“Hyundai Heavy Industries established a local corporation in India to make a bid,” said an official from the Defense Ministry. “Because the United States and Russia do not export submarines, Korea will compete to win the East Asian market against Germany and Japan.”