Crimes of anger on the rise and have new name

Crimes of anger on the rise and have new name 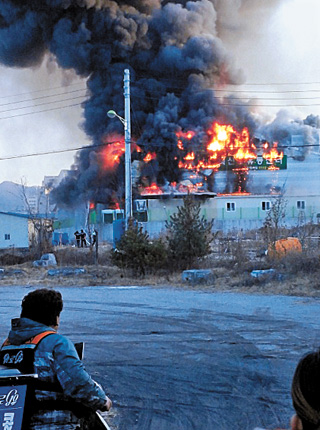 A woman set herself on fire inside a market in Yangju, Gyeonggi and inflammable gas exploded, engulfing the site. The woman was apparently angry, police said. [NEWSIS]

A 50-year-old woman poured a flammable substance over her body and set herself on fire on Sunday at a supermarket in Yangju, Gyeonggi. She died at the scene. A 47-year-old manager of the market, who is believed to have argued with the woman, was injured.

The police suspect that the woman was the wife of a 53-year-old man who was about to take over the supermarket, and the woman argued with the manager over the contract.

No one else was injured as the furious woman locked herself in an office of the market for the argument, which lasted a full hour. Police evacuated tens of shoppers and employees after the woman soaked herself in a flammable liquid, presumably paint thinner.

Flammable gas exploded in the market and the fire lasted about 90 minutes.

On Saturday, a 48-year-old tried to run over his 31-year-old girlfriend in Pohang, North Gyeongsang, after she said she wanted to end their relationship. When she hid behind a car, he rammed the parked car and the woman, and then got out of his car and tried to strangle her. According to the police, the man was furious because he saw his girlfriend with another man.

On Jan. 24, a 42-year-old sailor who had a dispute with an employment agency set three shops in Gukje Market in Busan on fire in a fit of rage. On Dec. 14 in Nowon District, northeastern Seoul, a 56-year-old man who told a 36-year-old man to move his car was beaten with a baseball bat by the offended man and his friends. The 56-year-old victim reportedly has brain damage and is paralyzed on the right side.

ICD are a class of psychiatric disorder in which people fail to resist a temptation, urge or impulse that may harm themselves or others. The National Police Agency said that 152,249, or 41.5 percent, of 366,527 criminals last year committed violent crime without premeditation.

“People who commit murder or other forms of violence often say they regret their behavior or that they don’t know why they committed the crime,” said a police officer. “The problem is that they cannot suppress sudden anger.”

Experts blame an overly competitive social atmosphere and self-centeredness for the impulsiveness.

“Society is becoming more tough and dangerous as economic growth is slowing down and it becomes more and more difficult for people to succeed,” said Shin Gwang-yeong, a sociology professor of the Chung-ang University. “People are feeling more insecure because discontent and frustration toward with society builds up and is not relieved, so those feelings are expressed in accidental or random violence.”

Another difference is that people used to express their anger and dissatisfaction through self-destructive behavior, but that has evolved into such crimes as murder and arson.

“We used to focus on adapting to our surroundings and community, but parents nowadays usually comply with their children’s requests,” said Yu Beom-hee, a psychiatrist who runs his own clinic. “Therefore, people become less patient and express their anger when their desires are not gratified.”