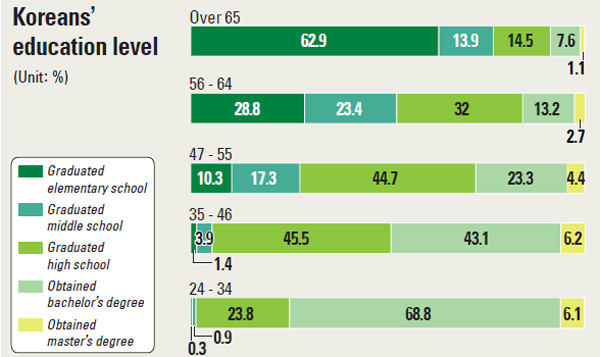 Many Koreans in their 50s in the baby boom generation are starting to panic as they near retirement because they don’t know how to spend their free time. With private companies enforcing early retirement amid the protracted economic slowdown, many people are spending their days at home with nothing to do except to watch TV or go for a walk.

Mr. Kim, who retired from a local conglomerate last month, said he spends his days doing just that. He has nothing to do and nowhere to go.

The 55-year-old had been saving for retirement in a private pension plan for a long time. His health is good, but he doesn’t know what to do with his free time. He never thought about what he would do after retiring.

Kim was born in 1960. He was accepted into a university in 1980 and started working for the conglomerate six years later, where he spent the rest of his career.

“When I was a student, playing around was considered very irresponsible and after I became a salaryman I had no chance to think about what I like to do,” Kim said, adding that he doesn’t even like traveling overseas.

“The baby boom generation that began retiring in recent years is the most vulnerable group in terms of preparing for post-retirement life, despite their high interest in leisure,” said Cho Myeong-ki, a senior researcher at Samsung Life Insurance’s retirement research institute. “Although they have earned high incomes and have lots of time on their hands, they aren’t familiar with spending leisure time actively due to a lack of experience.”

As more and more baby boomers are expected to retire soon, they must plan their activities after retirement.

According to a survey by the institute, nearly half of the Koreans who have retired spend their time watching TV or walking around and chatting, but they do not have clear hobbies.

“It was normal for our parents’ generation to spend the rest of their lives looking after their grandchildren,” said Choi Seok-ho, head of the Research Center for Leisure Management. “But the baby boomers would have to live about 30 years longer than their parents after retirement, so not only their jobs but also their quality of leisure is important.”

Choi added that retired people should find activities that they can indulge in and learn properly.

Lee Yu-jik, a 54-year-old man who retired from his job at a small business in Busan two years ago, learned to build Korean traditional houses by attending classes at Cheongdo Hanok Academy in Cheongdo, North Gyeongsang, for three months.

“I have been interested in making wooden chairs and tables for a long time,” Lee said. “I was mulling what to do several years before my retirement and decided to develop new skills by learning how to build houses.”

What started as a new hobby has been his job since last year. Lee is currently building a house and gazebo in an orchard in Cheongdo.

“Despite the physical toll, I feel proud when I see a Korean traditional house that I built,” Lee said. “I am planning on constructing a house for my family one day in my hometown.”

Park Myeong-ye, a 56-year-old former university employee, published a book after traveling around the country to visit Catholic churches last year. To prepare herself, she took a travel writing course and a publication course at Yonsei University and wrote the book with her colleagues.

“It was just a vague dream I had after retirement, but I was able to realize it after learning how to write better and take photos,” Park said.

Kim Tae-hwi, a 53-year-old businessman, turned his hobby of trimming trees and flowers at nearby apartment buildings into a job as a landscape architect. He runs the business on his own but also attends urban farming classes to acquire new skills.

“My hobby has led me to urban farming,” Kim said. “Having a small garden at home is popular these days, so I can use the skills for a new business.”

For healthy leisure, forming a good network among family members is also important.

“If husbands and wives have a good relationship and have lots of conversation, and if parents and children are close, satisfaction with leisure increases significantly,” said Park Ji-sung, another researcher at Samsung.

Socializing with family and friends and volunteering can help ease stress.

“People who have been blindly working for a long time can feel stressed when they suddenly stop working,” Park said. “Doing community service and having a good relationship with family are necessary to maintain good mental health for the next 30 years after retirement.”