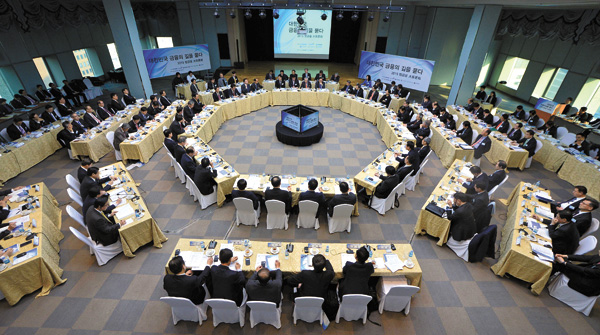 Korea’s financial industry should prepare for a “global innovation war” by ditching its long-held conservative practices and improving outdated regulations, said leaders of the country’s leading financial institutions at an unprecedented meeting Tuesday organized by the government and industry.

It was the first time that almost all heads of financial holding groups, banks and finance-related businesses and institutions gathered for a discussion that lasted nearly six hours.

Due to the new norm of low growth and low interest rates worldwide, the Korean financial market has significantly contracted.

Worse, the industry has been under fire for mishandling the personal information of customers in the wake of the largest-ever leaks of information from major credit card companies in early 2014.

Tuesday’s meeting was hastily organized after the Financial Services Commission (FSC) was scolded on Jan. 15 during its report to President Park Geun-hye.

“The financial figures need to hold a seminar and brainstorm ideas for innovation,” the president said during the seminar.

“I implore that all of us here to make a change together. Reform can never be a fatigue. Reform will be a bitter but sweet herb medicine for Korea’s finance and economy.”

While criticizing the old, rampant attitude of shunning change, Shin applauded the industry’s growth and asked for more efforts in response to the changing global financial environment.

But since 2010, the Korean financial industry has lost steam.

“Due to slow growth of retail banking that used to be the main growth engine for Korean industry, financial institutions’ return on equity fell to 3 to 5 percent, making the industry less competitive globally and contributes less to GDP growth,” said Ha Yung-ku, chairman of the Korea Federation of Banks.

Under the theme of innovation and reform, the fusion of information technology and finance, widely known as “fintech,” was at the top of the discussion agenda.

“There is no future without reading the changing mega trends centering on the shift to the Internet of Things [IoT], wearable devices, smart vehicles 3-D printing and drones,” Shin said.

To make Korea a financial leader in the region, its financial watchdog and financial institutions both should change, said Richard Dobbs, director of the McKinsey Global Institute, who came from London at the FSC’s request.

Korea is known for “bbali bbali” (“quickly quickly”) actions, and this needs to be applied to the financial sector, too, he said.

Financial institutions urged the government to lift unnecessary regulations on the industry.

According to suggestions submitted to the FSC before the meeting, many institutions see the current problem as too much interference by the authority in everyday business.

“The government and watchdog decide what institutions need to do and doing something slightly different becomes the subject of punishment,” said one attendees.

“There should be innovative measures to lift regulations,” said Hwang Young-key, chairman of the Korea Financial Investment Association. “Otherwise, some Korean financial institutions will start collapsing.”

“Financial policies and eased regulations need to be designed in a way that businesses can really feel in the field,” said Lee Sung-woo, CEO of Yelopay, a fintech business.