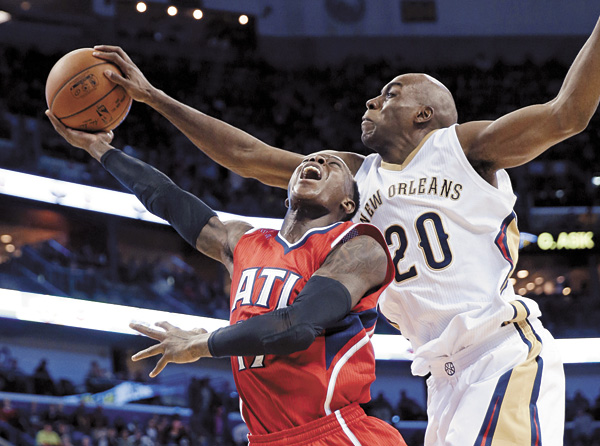 Pelicans guard Quincy Pondexter, right, stuffs Dennis Schroder of the Atlanta Hawks on a drive to the basket on Monday, local time, in New Orleans. The Pelicans won, 115-100, to snap a 19-game winning streak by the Hawks. [AP/NEWSIS]

Paul Millsap and his Atlanta teammates didn’t sound terribly concerned about the end of the Hawks’ franchise-record 19-game winning streak.

After all, the Hawks’ 115-100 loss to surging New Orleans on Monday night - in a game marked by Anthony Davis’ ferocious play - was only the third defeat for Atlanta in 36 games.

“We’ve got a lot of season left,’’ Millsap said when asked to put the recent winning streak in perspective. “Nineteen games, that’s good. We lost one - 19-1 now. So it’s just regrouping. We can’t let one loss turn into two losses.’’

Davis, returning from a left groin strain that sidelined him for one game, had 29 points and 13 rebounds to help the Pelicans win for the sixth time in seven games. New Orleans’ recent run of good form has included victories over Dallas and the Los Angeles Clippers, and has pulled the Pelicans (26-22) within a game of eighth-place Phoenix (28-22) in the Western Conference.

“We just need to continue to do what we’ve been doing,’’ said Davis. “The past couple games, we’ve been rebounding, defending, sharing the ball. We don’t care who scores. That’s what we have to do.’’

That sounds a lot like the recipe Atlanta has been using to pile up an Eastern Conference-leading 40 victories.

“They had us on our heels from the very beginning,’’ said Hawks Coach Mike Budenholzer. “They deserve a lot of credit for us not starting well.

“Give our guys a lot of credit for a lot of good work over the last month,’’ Budenholzer added. “Tonight wasn’t out night. I am very proud of them. We’ll get back to work.’’

Jeff Teague scored 21 for Atlanta, but the Hawks fell behind by double digits in the first quarter and trailed the rest of the way, getting within single digits for only a few brief stints.

Eric Gordon scored 20 points for New Orleans, while Tyreke Evans scored 15 points and tied a season high with 12 assists for the fourth time in five games.

Millsap had 15 points and Kyle Korver 12 for the Hawks, who made only seven of 22 3-point attempts.

Omer Asik grabbed 17 rebounds for New Orleans, which outrebounded Atlanta 52-32. Davis grabbed eight of his rebounds on the offensive end, including one on a missed 3 that he corralled with his right hand and slammed home in one roundhouse motion.

Atlanta briefly got as close as seven in the third quarter when DeMarre Carroll, returning from a strained left Achilles that sidelined him two games, hit back-to-back 3s to make it 60-53.

But New Orleans kept scoring, and soon after went back up by 12 when Evans banked in a 3 late in the shot clock.

Gordon’s minutes were limited by foul trouble, but his backup, Jimmer Fredette, responded to additional minutes with 10 points, including a 3 that put the Pelicans up by 17 in the fourth quarter. Soon after, Asik’s putback dunk gave New Orleans its largest lead at 101-82 and sent the crowd into a frenzy, sensing there was no way Atlanta could recover during the last 6:03.