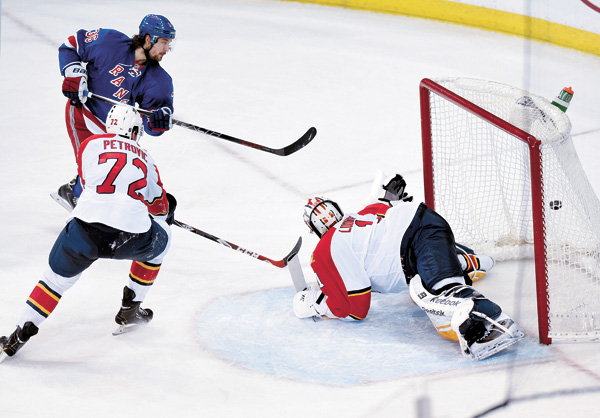 Boyle flipped a shot from the left point that hit the stick of veteran Florida defenseman Willie Mitchell and bounded past surprised goalie Roberto Luongo. Zuccarello made it 5-3 with 4:02 left.

Carl Hagelin was stopped by Luongo on a penalty shot with 3:19 remaining to keep it a two-goal game, but Nash scored into an empty net at 18:07.

The Panthers held a 1-0 lead in the first and dug out of a 3-1 hole in the second, but fell to 1-6-1 in their past eight and are eight points out of the final spot in the Eastern Conference playoff race.

Nash scored twice to move back into a tie for the NHL lead with 31 goals, and Kevin Hayes and Marc Staal also scored for the Rangers, who won their second straight behind Henrik Lundqvist’s 33 saves.

After Hayes and Staal gave the Rangers a 3-1 lead in the second, the momentum shifted back to the Panthers. Lundqvist briefly stemmed the tide when he denied Jonathan Huberdeau, who came in alone, but he couldn’t hold off Florida for long.

Bolland cut the deficit to 3-2 with 7:09 left in the second after he put the puck off the crossbar. The rebound came right back to him, and he batted it in for his second goal.

Then, during a power play, Bolland sent a hard pass from the goal line out front to Pirri, who dropped to a knee and fired in his seventh - and fourth in five games - with 4:30 remaining.

New York seemed to be in control after getting even on Nash’s first-period goal and then grabbing a two-goal edge when Hayes and Staal scored 6:37 apart.

Hayes gave the Rangers their first lead at 2:51 of the second on the power play when Zuccarello sent a pass from the left circle to Hayes for a one-timer from the slot that produced his seventh goal.

Staal, who played against his brothers Eric and Jordan in New York’s 4-1 win over Carolina on Saturday, waited with the puck above the right circle and snapped a wrist shot past Luongo at 9:28 for his third.

Yet the Rangers’ inability to consistently get the puck out of their end proved costly. It was the same issue that helped Florida control the first half of the first period.

Nash got the Rangers’ offense jump-started by scoring in the first period for the second straight game. This one gave him his first 30-goal season with New York.

Nash took the puck away and blew past 18-year-old defenseman Aaron Ekblad. He came in alone on Luongo and shifted from backhand to forehand for a sweeping shot past the helpless goalie.