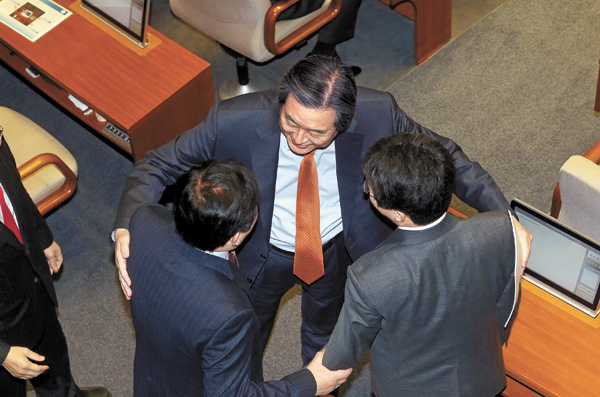 Kim Moo-sung, center, chairman of the ruling Saenuri Party, reaches out to Choi Kyung-hwan, left, deputy prime minister for the economy, and Yoo Seong-min, right, the newly elected floor leader of the Saenuri, on Tuesday in the main conference hall of the National Assembly before Kim gives a speech. By Kim Sang-seon

The chairman of the ruling party cautioned against expanding welfare irresponsibly, saying that giving more welfare benefits to people without asking them to pay more taxes is not possible - a direct jab at the Park Geun-hye administration’s promise of more welfare without tax increases.

And in a blunt note, he said, “It isn’t right for politicians to deceive people with such words” that promise a wider welfare net without more taxes to pay for it.

“People know this fact very well,” said Kim, 63, before lawmakers. “In a recent survey, 65 percent of respondents agreed that welfare without tax increase was not possible.”

Kim’s speech on Tuesday has put him and his party in an awkward position with the government of Park, who campaigned in the 2012 presidential election on the promise of more welfare with no new taxes.

“We have to realize that to enjoy welfare benefits as our right we also have to pay the price in the name of taxation that is our duty as citizens,” Kim said.

Kim cited the cases of Argentina and Greece in making his point, suggesting that neglect of fiscal soundness would bring the country to the brink of collapse.

Kim went on to say, “History will prove that the Greeks have made the wrong choice to put the Syriza in power,” referring to the recent Greek election that brought the anti-austerity party to power, sending shockwaves across the continent.

Kim’s stiffly worded address came as the Park government’s approval ratings dropped to 29 percent last week, an 11 percentage points fall in just three weeks, after a serious fumble on its income tax policy. It also came a day after the ruling party elected non-mainstream lawmaker Yoo Seong-min as its floor leader. Yoo, a former economics professor, agrees with Kim that widening welfare without a tax increase is not possible. Neither are in the pro-Park faction of the ruling party.

Kim called on the government to rein in welfare programs and cut back overgenerous and unnecessary benefits. “We need to increase taxes as a last resort after we get rid of inefficient and overlapping welfare programs,” he said.

The Park government has been hammered in recent weeks over its amateurish handling of tax policy, especially the revised income tax codes that led to some middle-class people paying more taxes for 2014, which the government had specifically said wouldn’t happen. With the government’s position on “no tax increases” unchanged, public suspicions have grown that the government is trying to cover ballooning welfare bills by resorting to subterfuge and dramatic price hikes on things like cigarettes.

To cover the growing welfare bills, the opposition wants the government to repeal tax breaks for conglomerates implemented during the Lee Myung-bak administration, which slashed the maximum corporate tax rate to 22 percent from 25 percent.

Kim also touched on the recent decision from the Health and Welfare Ministry to shelve a reform plan for the national health insurance plan.

The reforms were supposed to slap heavier insurance premiums on the country’s high-income earners while reducing the contributions from less-affluent Koreans, especially from the 7.6 million self-employed households, most of which are mom-and-pop shops and daily laborers.

Analysts immediately said the government was abandoning necessary reforms because it was afraid of any political blowback following the income tax reforms that raised middle-class tax bills for last year.

“The reform plan was a well-intended measure to fix unfair practices, but the ministry lost its credibility with the people because of its unilateral decision to postpone it,” said Kim.

He said the ruling party would throw its full support to the reforms if the Health Ministry changed its mind and pursued them.

Less than an hour after Kim’s speech, the ministry announced it will begin reviewing its reform plan this year, a change from its position last week that it would not do so until after this year.