Moon, Park duke it out over convention rule

Moon, Park duke it out over convention rule 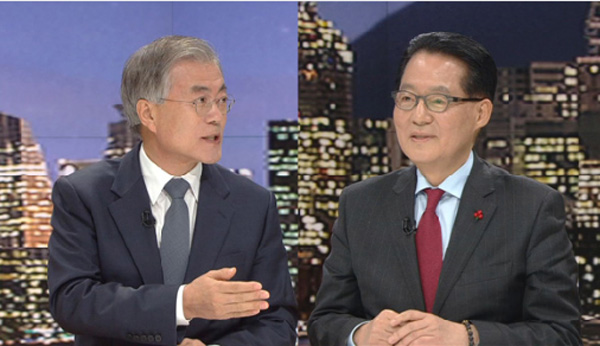 Lawmakers Moon Jae-in and Park Jie-won, rivals for the chairmanship of the opposition New Politics Alliance for Democracy, have clashed with vitriol over an election rule, raising worries over the state of party unity ahead of its convention Sunday.

A verbal attack was first launched by the Park Jie-won camp, which strongly protested the party’s decision earlier this week to accept Moon’s demand that it amend an election rule.

The rule that was repealed on the Moon camp’s request stipulated that the party include the percentage of “no opinion” responses in public opinion polls used to elect the chairman. The party agreed following a vote by the election supervisory body members.

Moon, who was defeated by President Park Geun-hye in the 2012 presidential election, is best known to the general public and is most likely to do well in the public opinion poll. Knocking out the “no opinion” results will boost his score, analysts say, over Park’s or Lee In-young, who is running the distant third.

Analysts cite a scenario in which Moon received 40 percent of the public opinion poll votes while Park and Lee got 30 and 20 percent support respectively, with 10 percent of respondents saying they had no opinion. If the no opinion votes were knocked out, Moon’s support rate would increase by 4.4 percent to reach 44.4 percent, while Park’s would rise 3.3 percent to reach 33.3 percent and Lee’s would rise to 22.2.

The Moon camp said the rule requiring the “no opinion” results had never been applied in the past.

Since the party made its decision Monday, veteran lawmaker Park has not hidden his anger at Moon and what he called the “shameless” members of the faction he leads in the party, the faction associated with late President Roh Moo-hyun.

“If Moon did not really know about the party rule [before he raised the issue], then he was clearly incompetent. If he knew about the rule but still pushed to change it at this point, he is just playing dirty,” said the former presidential chief of staff for late President Kim Dae-jung. Park added during a live televised debate hosted by JTBC that the party is being monopolized by pro-Roh faction members, who act like tyrants.