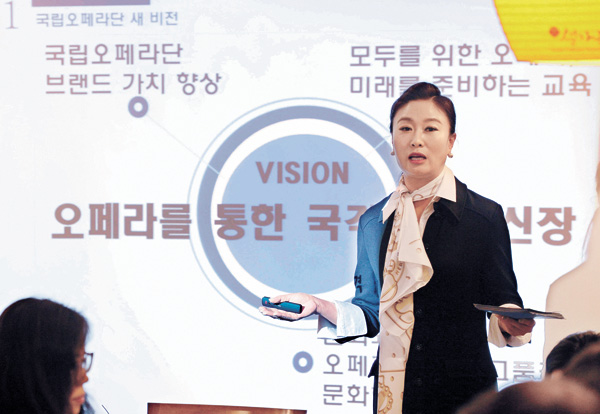 Former soprano Han Ye-jin, 44, was officially announced as the artistic director of the Korean National Opera on Tuesday, despite coming under criticism for an alleged lack of professionalism and appropriate experience.

“I am young and have no experience running an organization,” said Han in a press conference during which the decision was announced.

“However, I am very sad that I am being judged before I even do something wrong. I know it’s the Korean sentiment that when a leader is young, they see the person as incompetent and inexperienced. But in Western culture when they see a young leader they often view it as fresh new change.”

After the Ministry of Culture, Sports and Tourism’s announced on Jan. 2 its decision to make Han the artistic director of the state-run orchestra, the committee argued that such an ambiguous appointment is a good example of the government’s chaotic personnel policy, which it says has even penetrated into the culture and arts field.

It also accused Han of falsifying parts of her resume, in which she wrote that she had taught at Sangmyung University as a visiting professor since 2013 when she actually started last May.

Han said the error occurred after a miscommunication between her and Culture Ministry officials. She clarified that the mistake was a “typo.”

“I am only a visiting professor, which is the same as a part-time lecturer to be frank,” said Han. “It’s not even a full-time professor’s post. I would not lie about the period as it doesn’t benefit me in any way.”

Towards the end of Han’s press conference, Park Hyun-joon, head of Hangang Opera Company and a member of the emergency protest committee, burst into the room and complained that Han should not be holding the conference and that she should step down.

“We do not know where she’s from and no one seems to know who recommended her and how she was selected,” said Park. “We are opera singers. We are not the kind of people who like holding protests and causing trouble. But why are we doing this? Because we can’t watch this nobody take the lead of the national opera company.”

Despite the commotion, Han confirmed that she will not step down and asked the public to judge her only after she has done something wrong. She left the press conference through the back door.

The artistic director position was vacant for 10 months before the former soprano’s appointment.