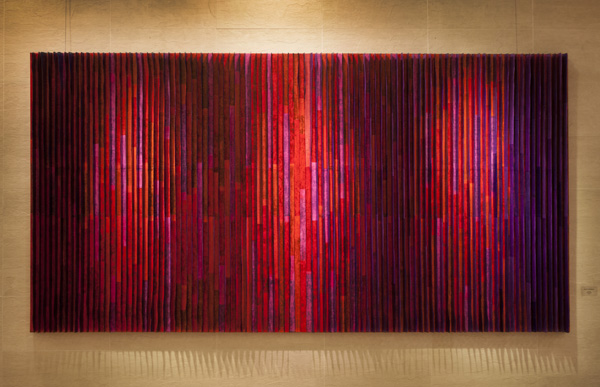 “Affectionate Things” by Park Dong-yoon is a collage using hanji, or traditional Korean paper. Park is one of eight young artists selected by the E-Land Foundation for Culture & Arts. The artists will receive financial support for the exhibition at E-Land Space in Gasan-dong, southwestern Seoul. Park began his exhibition on Tuesday, which will run to Feb. 27. By Park Sang-moon

You name it, and E-Land Group probably has it.

The fashion and retail conglomerate has been rapidly expanding its business to food and leisure over the past decade. It now owns hundreds of brands at home and abroad that range from clothing shops such as SPAO, Teenie Weenie, Lloyd and New Balance, to restaurants like Ashley, Rimini and Asia Moon.

It also has four Kensington hotels and resorts across the country.

But it’s not only the diverse range of businesses it owns that makes E-Land Group special. The company has been actively collecting thousands of rare items - such as John Lennon’s limited-edition electric guitar from 1992, Charlie Chaplin’s fedora and the bamboo cane from the movie “The Golden Age” (1925).

More recently, the group also purchased a 33.19 carat diamond owned by Elizabeth Taylor in an auction for about 10.1 billion won ($9.2 million) - two or three times higher than the expected bid - as well as Orson Welles’s Oscar from 1942 for the film “Citizen Kane” (1941).

E-Land Group says that the thousands of items it owns are on display at the various branches of the group’s family restaurant Ashley across the country, as well as its Kensington Hotel chains, offering visitors in Korea an opportunity to view rare items that belonged to international stars.

The Kensington Museum on the ninth floor of Kensington Stars Hotel in Seorak, Gangwon, has an Abby Road exhibition that displays original items owned by the Beatles, including a suit, shirt and electric guitar belonging to John Lennon, the only existing guitar autographed by all the members of the band and Paul McCartney’s handwritten music scores.

On the first floor of the hotel, visitors can see a 25-inch gold and silver scepter, which King Edward VII received when he took the British throne in 1901 at age 59 after the death of Queen Victoria.

In fact, five of E-Land Group’s items were borrowed by the Victoria and Albert Museum in London for its “Hollywood Costume Exhibition” in October 2012.

The pieces were Charlie Chaplin’s cane and fedora, which E-Land Group purchased at an auction in Beverly Hills, California, in April 2011 for about $100,000, the dress Katherine Hepburn wore in the film “Mary, Queen of Scots” (1936), the dress Barbara Streisand wore in the film “Hello Dolly!” (1969) and the outfit Joan Crawford wore for the film “Mildred Pierce” (1945). 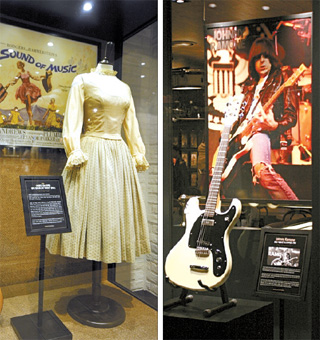 Left: A dress that actress Julie Andrews wore for “The Sound of Music” (1965) is one of many celebrity-related artifacts owned by E-Land Group. It is on display at restaurant chain Ashley’s branch in Busan. Right: A guitar belonging to legendary punk band the Ramones’ lead singer Joey Ramone is on display at Ashley in Hongdae, northwestern Seoul. Provided by the group

The group began to collect rare items belonging to celebrities in 1996, especially costumes worn in films, as CEO Park Song-soo wanted to start collecting rare items for Koreans to see and enjoy.

E-Land explained that it plans to open a theme park that houses a museum showcasing items from its rare collection in the near future.

Allowing the masses to enjoy something unusual and precious is in line with E-Land’s “masstige” strategy. The word, a portmanteau of “mass” and “prestige,” has been used to describe products that are “premium but attainable.” The group’s fashion brands especially follow this marketing game plan.

E-Land’s collection attracts the masses, but the company says its larger corporate sponsorship project is through its E-Land Foundation for the Arts & Culture.

A department at the company was established in 1993 to research modern Chinese paintings. Two years later, it started to hold exhibitions in Korea for up-and-coming modern artists from China.

Three Chinese artists have been invited to hold exhibitions in Korea, which the group says helps bridge cultural exchanges between creatives in both countries.

This year, three Chinese artists will visit Korea through E-Land to host an exhibition at the Miral Center in southern Seoul in October.

The project became more active in 2002, leading the group to turn the department into the E-Land Foundation for the Arts & Culture in 2005.

Its programs have become more diverse over the years, including the organization of an international exhibition to preserve and develop pottery and ceramics in Japan, China and Korea.

Each nation takes turns holding an international exhibition in their home country, which the foundation sponsors.

After the foundation was established, it opened its E-Land Space on the first floor of its headquarters in Gasan-dong, southwestern Seoul. 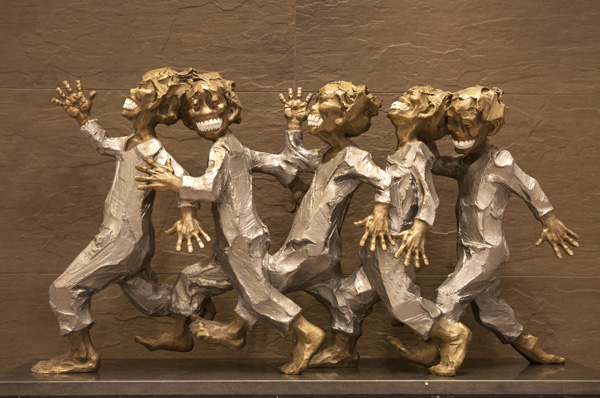 A sculpture by Kim Young-woo, which is exhibiting at the E-Land Space until Feb. 27. By Park Sang-moon

The venue invites young and rising artists to submit their portfolios. Eight are selected each year and E-Land Space not only provides them with a place to hold an exhibition, it also gives them financial support to hold a show.

“We don’t limit anyone,” said an official from E-Land Space. “So artists who apply for this are aged between 20 to even 60. Most who get selected seem to be between 20 and 40, not that age is important.”

The official added that the judges evaluate the work without knowing the artists’ age, gender, what school they are from or anything about their background.

Once the eight artists are selected, they can exhibit their work at E-Land Space for a month during the following year.

The artists prepare for the exhibition during that year and the expenses for it - ranging from transportation to printing brochures - are all funded by the space.

“The selected artists also get to have ‘exhibition appraisal’ time where they talk frankly about the work and about living as an artist in Korea,” said the official. “We also provide other education programs for the artists and opportunities to communicate with E-Land Group executives and staff members.”

As most of the expenses for the exhibition are funded by the group, the selected artists, according to E-Land Space, are “highly satisfied” after the exhibition.

Next month, 20 artists among all of those who have exhibited at the space since 2005 have been selected again by professionals to show their work at the Seoul Arts Center in southern Seoul.

Artist Choi Geun-seok, who held an exhibition at E-Land Space last August, said it was a great opportunity for him to “personally witness and experience the nonprofit program of discovering and supporting young artists.

“The support you get, which starts from the funding for the actual exhibition to other additional expenses like promotional activities as well as programs that follow afterwards, I believe was the best kind of treatment I have received as an artist,” said Choi. “It’s incomparable to other art fairs or general gallery invitation exhibitions.”

Many companies look for something different when it comes to corporate social responsibility programs. It’s understandable in their perspective that when they spend money they might as well stand out and be somewhat unique. But it’s a little different in the recipients’ point of view.

“Considering the poor working environment for current artists in Korea, such a scale of support will be a great help to rising artists, and it would be great if similar programs could be established,” said Choi.

“I hope other companies benchmark this program by the E-Land Foundation for the Arts & Culture and supplement artists in areas like residence systems, creative studio openings, art fair support systems and more, on a company level.”

Choi works on plane surfaces under the title “Mental Imager” by embodying images that are expressed from the subconscious into natural scenery.

“Artist Kim used to work on sculptures that dynamically express bodies and the movements of hard-working laborers,” said Ko Kyung-ok, a curator at E-Land Foundation for the Arts & Culture. “But in 2010, his work began to transform to feature a more lifelike sculptures of people.”

As for Park’s work, the use of hanji and Korean traditional fabrics makes it look very “Korean.”

According to Ko, the artist has long been researching about what “Koreanness” is. His recent works are collages using traditional Korean paper and fabrics, creating a “beautiful harmony of colors,” says Ko.

“The artists managed to find a point between modernized Western aesthetics and traditional Korean beauty. That’s what can be seen in his work of geometric image collage using traditional hanji - the result of his long interpretation of that ‘Koreanness.’”

The exhibition by the two artists will be on display at E-Land Space in southwestern Seoul until Feb. 28. The space opens from 9 a.m. to 5 p.m from Monday to Friday. It is closed on weekends.