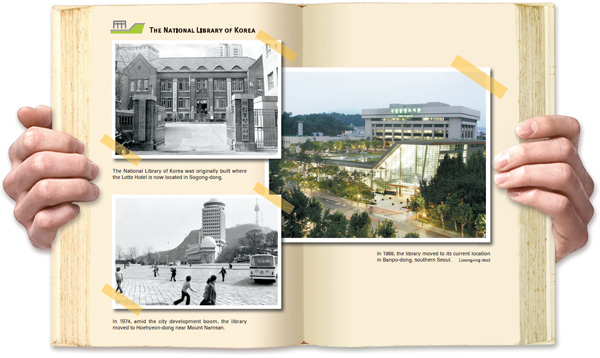 Top left:The National Library of Korea was originally built where the Lotte Hotel is now located in Sogong-dong. Right:In 1988, the library moved to its current location in Banpo-dong, southern Seoul. Above:in 1974, amid the city development boom, the library moved to Hoehyeon-dong near Mount Namsan.[JoongAng Ilbo]

For many national institutions, this year is very special, as it marks the 70th anniversary of Korea’s liberation from the 1910-45 Japanese colonial rule.

For many state-run institutions, it is also the 70th year since they began standing on their own two feet, free from Japan’s cultural repression.

The same goes for the National Library of Korea, which has a permanent collection of about 10 million books.

Some people come here to read; others to find an old land registration map to prepare for a lawsuit over land ownership; some to locate lineage books and discover their roots.

The beginnings of this institution - or its rebirth, to be more exact - go back to Aug. 16, 1945, a day after Japan surrendered to the Allied forces and World War II ended.

It was also the day Park Bong-seok (1905-unknown), a Korean working at the Library of the Japanese Government-General of Korea, as the national library was known back then, received the key from its Japanese director.

And that was it. Koreans were responsible for the library from then on, a place where texts, slowness and silence are considered the greatest virtues in today’s visually oriented, fast-changing and loud world.

The JoongAng Ilbo and the Korea JoongAng Daily decided to examine the National Library of Korea’s history, as well as how it is adapting to contemporary society.

The Japanese opened and operated several libraries in Korea in an attempt to compile data on its colonial rule.

One - the Library of the Japanese Government-General of Korea - opened in 1923 where Lotte Hotel in Sogong-dong, central Seoul, stands today.

Top left: In 2009, the library opened a digital section. Center: Last July, it unveiled an 18th-century military record, one of the rare ancient documents in its collection. Bottom left: As seen in this 2010 file photo of a show on digital art, exhibitions are another way the library is trying to communicate with the people. [JoongAng Ilbo]

Given Japan’s track record, it is probably not too surprising that it amassed some rare and important Korean publications in its archive.

Case in point: “Deer,” a poetry book by Baek Seok (1912-96). In 1936, when Japan was increasing its cultural repression of the Korean people, Baek, a respected poet, published 100 copies of the book with his own money.

He was forced to submit one copy of the first edition to the library. That very copy still remains in its collection today.

“Through books and literary magazines, the museum offers a chance to examine how modern Korean literature traveled through the periods of enlightenment, Japanese colonization, liberation and division,” said Ji Seon-hye, an official at the library’s data management division.

After liberation, Korean officials received control over the library, but they were still concerned that the Japanese could either destroy the collection or steal important artifacts.

That’s why, according to historians and representatives of the National Library of Korea, Koreans protected the museum around the clock in three shifts.

Besides guarding the library from the Japanese, officials collected propaganda leaflets and posters from the streets, believing that they would be important for future generations to see.

The National Library of Korea opened on Oct. 15, 1945. On that day, 173 people visited the library. Admission was not free, and each paid 20 jeon (100 jeon amounted to one won back then). It was rather a humble venue, with just 254 seats in the reading room. Interestingly, 50 were saved specifically for women.

Nonetheless, the number of visitors rose to 3,000 per day through word of mouth in just 15 days.

The good days, however, did not last long. The Korean War erupted on June 25, 1950, and on July 3 the North Korean army took over the library.

According to the book “Librarian Park Bong-seok’s Life and Philosophy” (2000) by Oh Dong-geun, the titular Park refused to leave the library and attempted to protect it from the North Koreans. He is believed to have been taken by the invading army to North Korea, the book says, and his whereabouts have been unknown since.

Although the South Korean Army briefly reclaimed control over Seoul, the tide turned and the North Korean army moved south fast. About 11,429 books had to be taken to Busan, where officials took shifts to protect them.

The National Library of Korea did not reopen until November 1952.

In 1968, another unfortunate incident engulfed the flourishing institution, when a mysterious fire burned 3,000 books. And in 1974, amid a city development boom, the library moved to Hoehyeon-dong, on Mount Namsan, where the Seoul Education Research and Information Institute stands today.

According to newspaper articles of the day, the library’s popularity continued even after its relocation.

“About 1,000 students flocked to the library way before 7 a.m., which was the opening hour, and waited for hours, some up to three hours,” a JoongAng Ilbo article printed Aug. 5, 1976, reads.

In 1983, the library became free of charge. And in 1988, about 12 years after it moved to the Mount Namsan area, it relocated to its current site due to limited space and rising demand.

Under Korea’s military government, the authorities banned people from reading certain books at the National Library of Korea. The list included “Deer” by Baek Seok, citing the reason that Baek’s hometown is in North Korea.

It is illegal in the South to show any support for the North.

For 30 years after the 1950-53 Korean War, the book, along with many others, was considered taboo. Only in the late 1980s, when the democracy movement swept the country, did those books became available again.

In the 1990s, the library was where Korean students flocked ahead of important tests and functioned somewhat like a cram school. But in the mid to late 1990s, so-called reading rooms, or dokseosil, sprung up across the country for students to come and spend the night prepping for important tests. In line with the trend, the library closed its public reading rooms in 1996 and also banned the use of cramming at the library.

Come June, the library’s collection of books is expected to break the 10 million mark. To ensure their high quality, especially the old books, the library strictly sticks to a policy of keeping its temperature at 20 degrees Celsius (68 degrees Fahrenheit) and humidity at 40 percent, officials say.

Since the dawn of the millennium, the library has been highly focused on digitalizing its collection. In 2009, it even opened a separate building dedicated to its digital archive. But Lee Hye-eun, a curator at the library, says digitalizing old Korean documents kept overseas is another project it is highly invested in.

“We do not believe that repatriating all of Korea’s old documents as soon as possible is the solution to the issue of Korea’s cultural properties kept overseas,” Lee said. “We believe creating a solid, trustworthy digital archive of old Korean documents kept overseas is important, and we’ve been doing that steadily for the past 10 years.”

The library is also actively conducting exchanges with its overseas counterparts. Since 2006, it has invited representatives from about 20 countries, such as Tajikistan and Bhutan, in order to help them learn how Korea operates its national library. It also donated a part of its collection to libraries in Russia and Mongolia, where Korean studies are gaining traction, in order to help them set up a Korean archive within their institutions.

There have been some important academic discoveries made at the institution, too. In 2006, Yangsegyebo, a book documenting eunuchs of the Joseon Dynasty (1392-1910), the only material of its kind known to exist in Korea, was found in the library. Historians learned through the book that Joseon eunuchs adopted children with the same surname as them to carry on their name.

The library also recently obtained letters written by North Korean soldiers during the Korean War from the National Archives and Records Administration in the United States. The letters, which U.S. soldiers took to their country, number about 1,000.