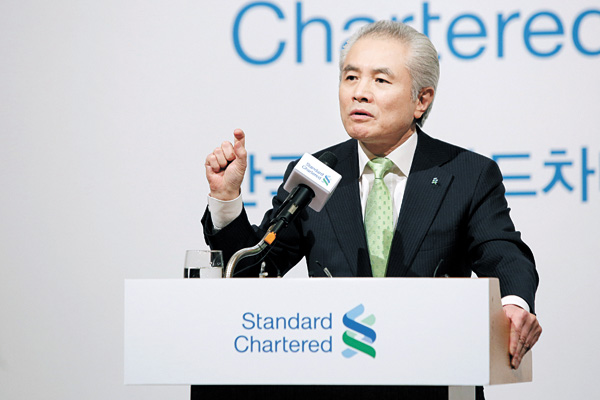 Park Jong-bok, new president and chief executive officer of Standard Chartered Korea, announces his plan to strengthen the bank’s retail business during a press conference Wednesday at Lotte Hotel in downtown Seoul. Provided by the bank

In his first press conference at a hotel in central Seoul on Wednesday, Park emphasized that Standard Chartered Korea started out as Cheil Bank before being acquired by the British multinational bank, and he pledged restore the pride of the former bank within his term.

“I don’t mean to be going back to the past,” Park said. “We had the DNA of success and we want to use that DNA to do better.”

Park, who has more than 20 years of retail and corporate experience with the bank, is the first Korean to head the local branch. For the past 10 years since the British bank entered Korea, foreign presidents were sent to run the branch, but the bank’s performance and reputation did not notably improve.

Park even said he will minimize the use of English by the bank’s 6,000 Korean employees to increase efficiency.

“The group strategically changed its policy and decided to position local executives in top management for a more effective localization process,” Park said. “As a banker with more than 20 years of broad experience, I am confident I know what the bank needs to do in order to grow.”

“I can promise there will never be a withdrawal or downsizing,” he said. “SC has been preparing for digitalization of banking for the past three years by taking preemptive action in terms of restructuring branches. There will be no further restructuring.”

Last year, the bank consolidated 50 branches as part of restructuring and preparation for digitalized banking services.

The new CEO also said SC Korea will strike a balance between retail and corporate banking, which would run counter to the trend of foreign banks in Seoul shutting down or scaling back their retail business.

“SC Korea will seek a new form of retail banking in response to the changing financial market,” he said. “We launched Mobility Platform three years ago, a program under which our bankers go out to meet customers rather than waiting for them to visit us. The existence of physical bank branches has nearly come to an end, and having fewer branches will be a strength rather than a weakness in the future.”