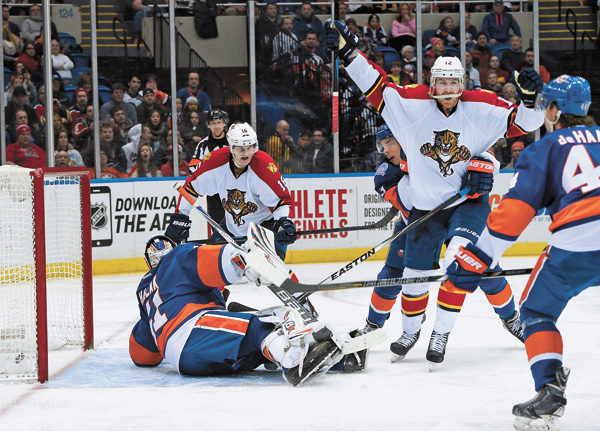 Florida Panthers center Aleksander Barkov watches as right wing Jimmy Hayes celebrates his goal in the third period during a game against the Islanders at Nassau Coliseum on Long Island on Tuesday, local time. [AP/NEWSIS]

The slumping Florida Panthers needed a win at the end of a three-game trip to the New York area, and they leaned on their goalie to get it.

No, it wasn’t Roberto Luongo to the rescue this time. Instead, backup Al Montoya delivered the victory.

Montoya made 32 saves in his first start in nearly a month, and Jimmy Hayes scored his second goal of the game 2:10 into the third period to lift the Panthers to a 4-2 win over the suddenly struggling New York Islanders on Tuesday night, local time.

“I’ve just been relying on what I can,’’ said Montoya, who made two relief appearances since his previous start at Calgary - another win - on Jan. 9. “Practice hard and practice hard. I know what I am capable of doing. I have done it before.’’

Erik Gudbranson also scored and Brandon Pirri added one into an empty net with 22 seconds left for the Panthers, 2-6-1 in their past nine - including defeats at New Jersey and the New York Rangers.

“We lost two games in a row so we had to salvage something,’’ Coach Gerard Gallant said. “It was a big win against a very good team.’’

Florida is still on the outside of the Eastern Conference playoff race, but the Panthers haven’t given up their postseason hopes.

“We needed to come in here and get that big W,’’ Hayes said. “We’ve still got to keep rattling off these wins and stay in this playoff picture and be successful at the end.’’

Anders Lee scored both goals for Metropolitan Division-leading New York, which has dropped three straight after winning six of seven. Halak made 26 saves.

“We need to be better, and it has to start with me,’’ Halak said. “Everyone needs to lean on each other. We gave up too many odd man rushes and created too many turnovers.’’

The Panthers grabbed a 2-1 lead with 9:45 left in the second when Tomas Fleischmann sent Gudbranson into the New York end with a backhand pass. Gudbranson drove down left wing and slithered a backhanded shot inside the left post for the defenseman’s third of the season and second since opening night. However, he has two in seven games.

This was his first with a 1-on-1 chance with a goalie.

“When do you see me do that in the offensive zone ever? Never,’’ he said. “I saw the lane so I took it. I beat the guys up ice and got a lucky bounce going short side. I don’t think he is going to let that in too often, but thank God he did today.’’

An eventful power play led to Lee’s tying goal with 7:15 remaining in the period. Just seconds after Halak stopped Derek MacKenzie’s short-handed break, after a turnover in the Islanders end, Lee deflected in Travis Hamonic’s drive from the right point to make the Panthers pay for too many men on the ice penalty.

Lee has scored four of his 15 goals in the past six games, but it wasn’t enough for New York.

“We have to find ways to win,’’ said Islanders Coach Jack Capuano. “Some guys need to step up.’’

The Islanders jumped out quickly against the Panthers, who were playing for the second straight night and the third time in four days - all in the New York metropolitan area. AP