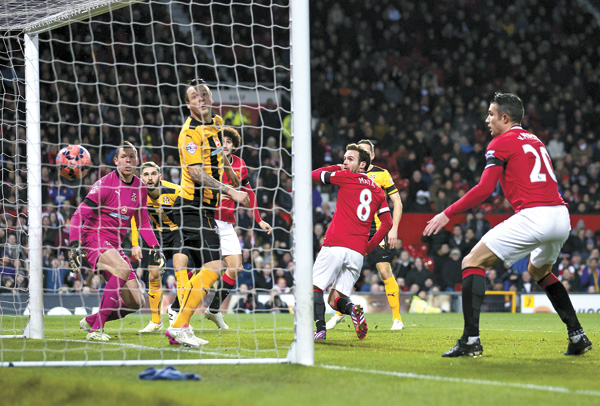 “I think that is our greatest chance to win a title,’’ United Manager Louis van Gaal said of his team, which is third in the league and not in Europe.

Although Cambridge failed to match the “giant-killing’’ feats of Bradford and Middlesbrough, which knocked out Chelsea and Manchester City respectively in the fourth round, the visitors did have an early chance to score at Old Trafford.

After 50 seconds, Daley Blind slipped and somehow sent Tom Elliott through on goal. The striker, seemingly taken aback by the scoring opportunity at Old Trafford, just about managed to maintain his balance and bent a shot past goalkeeper David de Gea with the instep of his right boot.

Luckily for the hosts there was not enough curl on the shot, which hit the outside of the post and bounced to safety.

The 20-time English champions regained their composure, but the 4-1-4-1 formation seemed to hinder their ability to carve open the away defense.

Wayne Rooney, marooned out on the right side, had United’s first shot on target but it was a weak effort.

Nothing was really going for United and its fans became impatient. Cambridge fans were reveling in the fact that they were holding a team sat 79 places above them in the league pyramid.

But their defense was finally breached in the 25th minute. Angel di Maria latched on to a clever pass from Paddy McNair and whipped a cross to the back post. Marouane Fellaini nodded the ball down to Mata and he stabbed the ball in off the bar.

Seven minutes later, the nerves inside Old Trafford eased further as the lead was doubled.

Fellaini’s shot was deflected into the path of Robin van Persie and the striker curled a short-range cross with the outside of his left boot to find Rojo, who headed in his first goal for the club.

After Di Maria and Van Persie came off, their replacements combined for the third goal in the 73rd minute.

Ander Herrera drove at the Cambridge defense and laid the ball off for Wilson, who smacked a powerful low shot across goalkeeper Chris Dunn into the far corner.

The night’s other FA Cup replay saw Sunderland come from behind to beat Fulham 3-1.

Ricardo Alvarez’s strike and Jordi Gomez’s penalty sent Sunderland through to a meeting with third-tier Bradford in the fifth round.