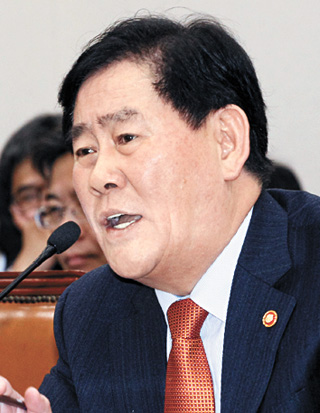 Finance Minister Choi Kyung-hwan said increasing taxes to cover ballooning welfare bills should only come as a last resort after the National Assembly reaches an agreement on the level of welfare the country needs, a remark interpreted as maintaining the administration’s “no tax increase” philosophy.

Speaking on Wednesday before lawmakers on the parliamentary Strategy and Finance Committee, the former Saenuri floor leader said a consensus on whether the country should aim for high welfare benefits accompanied by high taxes or less welfare with low taxes should be made first.

“The ruling and opposition parties and the public all have different ideas about the high welfare tax and low welfare tax,” said Choi. “Only after the Assembly comes to an agreement [on which way the country should be headed] can we think about delivering revenues needed to meet the demands.”

Choi’s remark was seen as passing responsibility to the National Assembly to decide whether tax hikes are necessary for Korea’s fast-aging population.

The minister’s remarks also hinted that the government would not restore the corporate tax rate on incomes exceeding 20 billion won ($18 million) to 25 percent from the current rate of 22 percent, which was slashed by the business-friendly Lee Myung-bak government. Doing so would signal that the Park Geun-hye administration was backing away from its promise of “no tax increases.”

“Corporate tax is levied based on the business performance of the previous year,” Choi said. “And major companies including Samsung Electronics and Hyundai Motor had a lackluster business year [in 2014].”

He said the government still expects a bigger role from chaebol groups in contributing to state coffers because the scope of tax-free income and tax deductions have shrunk significantly.

During his report to the committee’s lawmakers, he was pressed hard on whether a recent cigarette tax hike and revisions to the income tax code in 2013 amounted to tax increases despite the Park administration’s longstanding stance against them.

Choi, who has a doctoral degree in economics from the University of Wisconsin, said the government defines raising existing tax rates or creating new tax items as tax hikes.

On growing public complaints about the higher tax bills for middle-income workers for 2014, which the government specifically said wouldn’t happen, the minister said although people felt it as a tax hike, it isn’t in the government’s definition.

The Park government has been hammered in recent weeks over its handling of its tax policy, especially after the revised income tax codes in which the government converted income tax deductions to tax credits.

Alarmed by a strong backlash, the government pledged it would return parts of the taxes retroactively after recalculating tax credits in May.