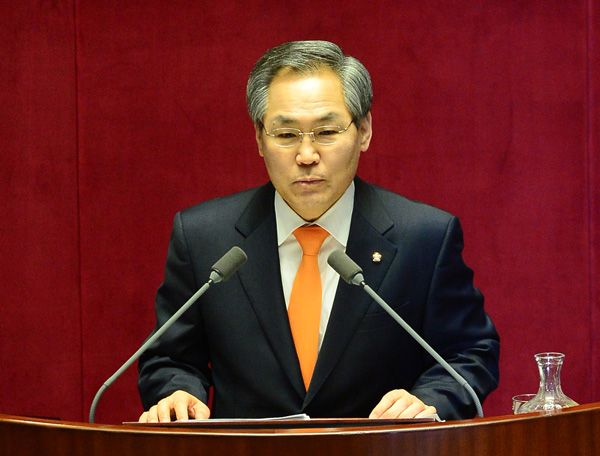 The opposition floor leader proposed a referendum next year on whether Korea should amend the Constitution to change its single-term presidential system.

In his speech before lawmakers, Rep. Woo Yoon-keun of the New Politics Alliance for Democracy (NPAD) said now is “the golden time” for parties to come to the table to find the best possible way to amend the Constitution, which has been unchanged since 1987, to reduce the power concentrated in the presidency. Woo’s speech was a follow-up to a speech delivered by ruling Saenuri Party Chairman Kim Moo-sung a day before.

“Whether it will be in the form of decentralized government or parliamentary government, let’s keep all options open and forge an agreement on an amendment for next year in a bipartisan manner,” Woo said. “And then let’s put it to a referendum vote at the time of the April general election next year.”

Woo said he personally favors a political system modeled on that of Germany and Austria, which gives a president authority to manage foreign affairs and dissolve the parliament while allowing a prime minister appointed by the assembly to deal with domestic affairs. But he said that all options should be on the table.

The so-called 1987 Constitution only allows a single-five-year term for president. Drafted after decades of dictatorship, it was intended to prevent any leader from clinging to power.

The current system has been blamed for a variety of political ills, including fanning partisanship and discouraging compromise as the conservatives and liberals compete to claim the powerful presidency.

It is possible that parties could agree to adopt a system resembling the U.S. presidential system that allows a reelection of president to a second four-year term.

Arguably the second most powerful lawmaker in the NPAD after its interim leader Moon Hee-sang, Woo said he agreed with Saenuri leader Kim that the country should decide whether it should aim for high welfare benefits accompanied by higher taxes or les welfare accompanied by low taxes.

“Kim made the right statement,” said Woo. “And to reach a public consensus, we need to listen to the people.” But he criticized the government for deceiving the public with a pledge not to raise taxes. A dramatic tobacco tax hike just came into effect and a revised tax code has led to higher tax bills for many middle-class workers.

On that note, Woo proposed a bipartisan body devoted to reforming the current taxation system, plugging tax loopholes and collecting a fair share of tax from various income groups. He demanded the government repeal tax breaks on the wealthy and restore the corporate tax rate to its original rate of 25 percent from the current 22 percent, which was slashed by the Lee Myung-bak government.

On frozen inter-Korean relations, the opposition floor leader called on the government to ban an anti-North Korea leaflet campaign as demanded by Pyongyang and resume Mount Kumgang tours, which were suspended in 2008 when a female South Korean tourist was fatally shot by a North Korean soldier.

He also demanded the Park administration lift punitive sanctions imposed on Pyongyang in 2010 for the torpedoing of the South Korean navy warship Cheonan, which left 46 sailors dead. Woo’s remark reflect demands by Pyongyang, which has put the lifting of the so-called May 24 sanctions on a list of preconditions to resume inter-Korean talks.