Stielike says Asian Cup a success on many levels

Stielike says Asian Cup a success on many levels 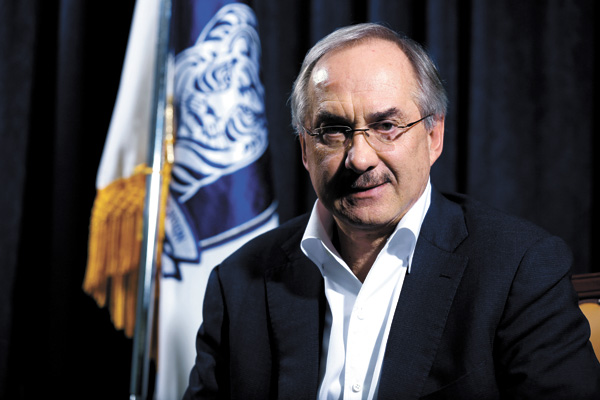 Uli Stielike, the national football team manager, promised in October that the team would play football that touches fans.

He believes that he has lived up to that promise.

In an interview with the JoongAng Ilbo on Wednesday at the headquarters of the Korea Football Association, the 60-year-old German said, “The players did move the fans by fighting hard in the Asian Cup in Australia.”

One way for the manager to check was to refer to the viewer ratings of Asian Cup games, said Lee Yun-gyu, Stielike’s interpreter and secretary. Ratings surged as the team advanced in the tournament, from 15.2 percent in the quarterfinal match against Uzbekistan, to 25.3 percent in the semifinal against Iraq, to 35.9 percent in the final against the host Australia.

When heard of his popularity, Stielike grinned and said, “I’m over 60. It should be the players who get the recognition.”

The following are excerpts from Wednesday’s interview.

Q. You’ve said the Korean national team will be the last team you coach. What is your ultimate goal?

A. South Korea is 69th in FIFA’s rankings. We may go up a few steps since we won five consecutive matches in the Asian Cup, but my long-term goal is to get into the top 30. Ahead of the Asian Cup, the press seemed to have wanted me to say that I’m going to win the tournament, but I only said we will play hard because we are representing the country, and I’m proud of them for keeping that promise.

How do you want to be remembered after stepping down?

I want to be remembered as a manager who put himself in the players’ shoes. Another goal of mine is to make football more popular among people in their daily lives, at home and at work. I want them to talk about not just politics or the economy but also about football when they’re having a drink at a bar or cafe. Also, I would like football games not to be cut off in the middle for other TV programs. I hope football will play a bigger role in Korean society.

Lee is a player any manager would want to play with. He constantly trains by himself and puts pressure on himself to fulfill the manager’s requests on the field. Even though he did not score in the final, his energy and performance were extraordinary. But he still needs to improve in technical aspects.

I’m a lucky manager because all 22 members of the national team had a similar attitude to Lee’s. The only one who did not play in the Asian Cup was goalie Jung Sung-ryong, but he was also in good shape. If a person who’s not familiar with the Korean team watched the training, he would have thought that Jung would be my first option. I think that’s another benefit that we gained from the Asian Cup. Koo Ja-cheol and Kim Young-gwon were also criticized after the World Cup last year, but they overcame that as a team.

Are we going to see more surprise stars like Lee in the two friendlies in March?

In the training session in December in Jeju, I kept an eye on two or three of them. I’m not going to tell you the names because they might feel too much pressure with the new season starting soon.

You have emphasized that the national team should change its attitude.

Before the third group match against Australia, I told them that they need to feel a sense of responsibility instead of fearing their opponent. Even if our ball possession is 70 percent, it means nothing if they keep passing the ball in their half of the field. They often passed the ball back to the goalkeeper, who lacks the most passing technique.

You may remember how we allowed the first goal in the final. Forty-two seconds before the goal, Cha Du-ri threw the ball in and Son Heung-min kicked it back out. Then we intercepted Australia’s throw-in and Kwak Tae-hwi passed the ball back to goalie Kim Jin-hyeon, but he kicked it out again. The team lost possession because of mistakes. We need to analyze it and fix it gradually.

What would you say are the strengths of the national team?

They are well disciplined and well educated, and also have the will to win the game. But they need to be more threatening and offensive with the ball.

Now you need to prepare for the qualification rounds of the Russia 2018 World Cup.

Most of the Asian teams have improved a lot. We haven’t won easily in recent matches because our crosses and long passes, which can open up the flanks, weren’t accurate enough. The players need to practice their techniques every day.

What do you want to say to the Korean fans?

Managers are satisfied when the players understand what we are thinking. The players always give me positive feedback. I saw the viewer ratings steadily went up during the Asian Cup. I said in a press conference shortly after I took over the team that we will play football that can touch the fans, and I believe the players did move the fans by fighting hard in the Asian Cup.