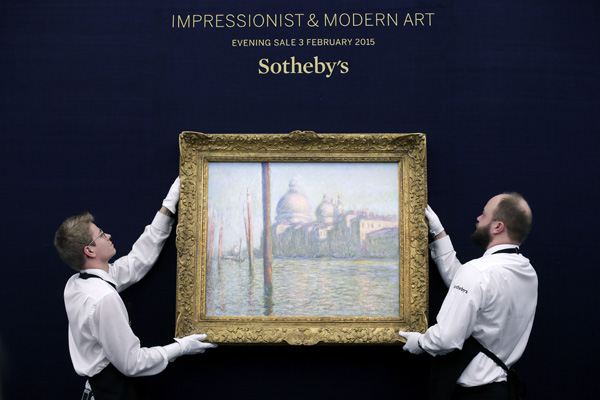 LONDON - A Venetian waterscape by Claude Monet has sold for more than $35 million at a London auction as the high-end art market shows resilience in a bumpy global economy.

Wealthy collectors from emerging markets such as Russia, China and the Middle East have helped buoy prices amid the aftermath of the global financial crisis in 2008.

Helena Newman of Sotheby’s Impressionist and Modern department said the sale saw “collectors from Asia and Russia asserting themselves as a continued force in the market.’’

She said it was “a great night for Monet,’’ with five works by the French artist netting a total of 55.7 million pounds.

Standouts at the sale included Henri Matisse’s “Odalisque in a Black Armchair,’’ which sold well over its upper estimate at 15.8 million pounds, and Pablo Picasso’s maquette for a steel sculpture that stands outside Chicago’s Richard J. Daley Center, which raised 8.9 million pounds.