Tax agency $8.4B short on revenue

Tax agency $8.4B short on revenue 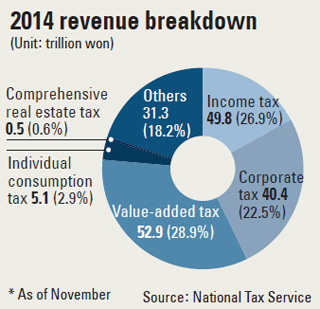 The National Tax Service (NTS) reported a tax collection shortfall of 9.2 trillion won ($8.43 billion) last year, the largest ever, and the situation could become worse this year.

The news of the tax shortfall comes amid heated debate over raising corporate taxes. The year-end tax settlement debacle has also angered the public as more people are having to pay more taxes back instead of getting a refund due to less benefits and calculation mistakes by credit card companies.

However, the NTS said it has set a tax collection target of 214.4 trillion won for this year, 7.4 percent higher than last year’s target.

To increase revenue, the agency plans to encourage taxpayers to make honest reports while seeking out tax dodgers, including those who are part of the “underground economy” or are evading taxes overseas.

But many remain dubious that the NTS will be able to reach its revenue goal, and with welfare spending continuously growing, market experts are betting on another shortfall.

According to the Organization for Economic Cooperation and Development, Korea’s welfare spending has been increasing every year.

Spending concerns and lacking tax collection have been dominating political discussions since the start of the year, with Saenuri Party leader Kim Moo-sung stressing earlier this week that it is impossible to expand welfare benefits without raising taxes. His statement was seen as directly opposing President Park Geun-hye, who promised during her campaign to increase welfare benefits without burdening tax payers.

The struggling economy is seen as a key reason for declining tax revenue. As of November, the NTS had collected 40.5 trillion won in corporate taxes, which is 1.5 trillion won less than it collected in the same period in 2013. Corporate tax is accounts for nearly a quarter of overall tax revenue, at 22.5 percent. The largest portion comes from, value-added tax, at 28.5 percent and income tax, at 26.9 percent.

“The global economy is showing signs of improvement and the low oil price is also considered a positive factor,” said an NTS official. “However, as there are still uncertainties in the market, there is a need for cautious tax management.”
BY LEE HO-JEONG [ojlee82@joongang.co.kr]