Moon pulls off role as a modern girl

Moon pulls off role as a modern girl 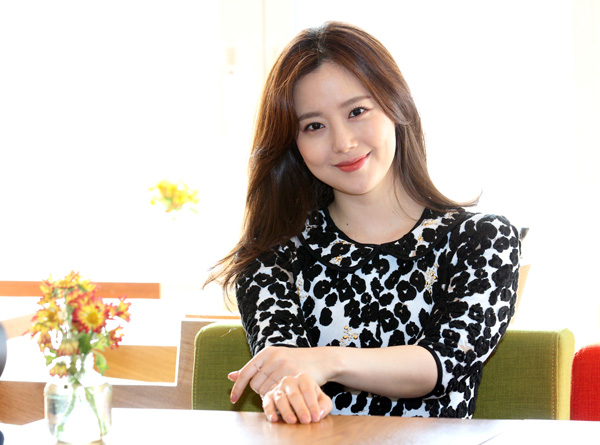 These words have often been used to describe actress Moon Chae-won, befitting most of the roles the 29-year-old is known for, such as the characters she played in the 2011 KBS drama “The Princess’ Man” and the 2011 film “War of the Arrows.”

That’s why few imagined Moon would take on a role in “Love Forecast,” a romantic comedy that questions the increasing trend of casual and insincere relationships between men and women.

Directed by Park Jin-pyo, the film features Lee Seung-gi and Moon as the main characters Jun-soo and Hyun-woo, who have been friends for 18 years.

In the film, Moon, a charming weather girl with several men in her life, is seen swearing, drinking, singing and dancing at noraebang, or karaoke, and using men to her advantage. But she’s a character that people can’t really hate, which Moon has nailed.

Ilgan Sports, an affiliate of the Korea JoongAng Daily, sat down with the actress to find out how she feels about her latest work.

Q. It’s one of your few romantic comedy roles. Did that put you under pressure?

A. I didn’t want to feel pressured, because if I felt that I was, I wouldn’t have been able to deliver the character Hyun-woo well. Director Park told me that he wanted the characters in the film to be “adorable,” and that Hyun-woo should be the most adorable of all. That was really helpful. But I also wanted to sneak in loneliness so that people know she isn’t just an insincere, easy girl.

How was working with Lee Seung-gi?

Most people say your role in the 2013 KBS drama “Good Doctor” was a turning point. Do you agree?

I think so. Most of the roles I assumed before “Good Doctor” were rather quiet and dark. Personally I liked those roles because they had rich, dramatic elements. But I realized that people could get tired of such an image. But most of all, I took the role in “Good Doctor” because I always wanted to play a doctor. [laughs]

In the end, I think my role in the drama helped me get the role in “Love Forecast.”

Which is harder to play - a dark role or a light one?

With dark roles, you have to get to the extreme end. It’s very energy-consuming, but in a way simple. But a light, girl-next-door image, in my opinion, requires more detail. So for me, the latter is more difficult.

It appears you aren’t taking on many roles.

For me, being prolific isn’t important. It’s my pace to do one or two pieces a year. I don’t want to spend my entire year acting. Even if you love your job, I think it’s stifling to spend all your time on it. I don’t want to be a horse that only runs forward. In my time off I go to exhibitions or operas. I need that time. I guess if you are a genius, you can get creative even if you are stuck in a small room. But I’m not that type of person and I need indirect experiences and inspiration.

In “Love Forecast,” the scene where you are drunk was quite memorable. Was it hard to act?

It wasn’t particularly hard or easy. I just did what I saw people do when they were terribly drunk. But I’m personally very interested in acting by using your body. And I think action scenes in television dramas and movies are different.

Lastly, what do you think is the best thing about “Love Forecast”?

I think it’s perfect for a date night. But it’s also a good movie for a girls’ night out. It’s a movie not just about love, but about friendship.