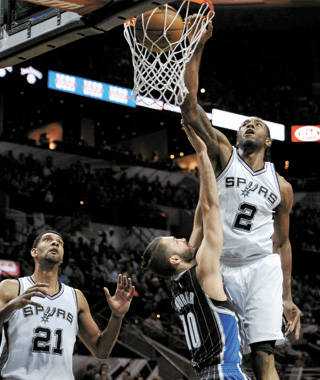 Orlando put up a strong effort trying to end a long losing streak, but the youthful Magic just couldn’t get past the defending champion San Antonio Spurs down the stretch.

The Spurs’ seventh straight victory over the Magic was surprisingly difficult given Orlando’s dismal season.

“We let them hang a little too much, but honestly it’s just good to close out a game,’’ Duncan said. “We made some big shots down the stretch. Tony [Parker] made a big one, Boris [Diaw] made a big one. But just to kind of fight through that, find a way to win the game down the stretch is good for us. It builds something for us.’’

The Magic led twice in the final three minutes of the third quarter and trailed 105-103 with 38.9 seconds remaining.

Parker’s third 3-pointer of the game kept the Spurs ahead and San Antonio’s defense sealed the win by collapsing on Victor Oladipo and forcing a missed nine-foot jumper.

“Orlando played a great game,’’ Parker said. “They shot the ball the very well, played great defense and made it hard on us. But we got the stops we needed and made the shots we needed.’’

Parker had 15 points and Kawhi Leonard scored 18 as San Antonio beat Orlando for the sixth straight time at home.

The Magic shot 11 for 19 in the fourth quarter to pull within two points, after trailing by six with 2 minutes remaining.

“We have a first-year player [Elfrid Payton] and a second-year player [Oladipo] on the court trying to win a ball game in the fourth quarter,’’ said Magic Coach Jacque Vaughn. “[The Spurs have] done this for many years, execution-wise, players knowing what they’re going to do and who’s going to get it. That’s just a part of growing up and being together for the continuity for a long time.’’

Nikola Vucevic had 25 points and 12 rebounds for Orlando and Tobias Harris added 23 points and 10 rebounds. All five Magic starters scored in double figures, but their reserves were outscored 41-17.

San Antonio was boosted by the return of Marco Belinelli, who had missed 18-straight games.

Belinelli had 11 points, including three 3-pointers, in his return from a strained right groin. His first points came on consecutive 3s in the final 1:11 of the third quarter that helped San Antonio take a 78-74 lead entering the final period.

“I felt good on the court,’’ Belinelli said. “I don’t have pain right now, but maybe I’ll feel something tomorrow morning. My confidence is back for sure. I was a little bit scared on defense, especially, and on offense to move without the ball, but that’s part of injury and I’m going to do my best.’’

Orlando made a close contest of the road game amid rumors Vaughn will be fired soon.

“We’re just staying focused on what we can control and that’s playing hard every night,’’ said Harris. “Tonight we came out, we did that. Unfortunately, we came up short.’’