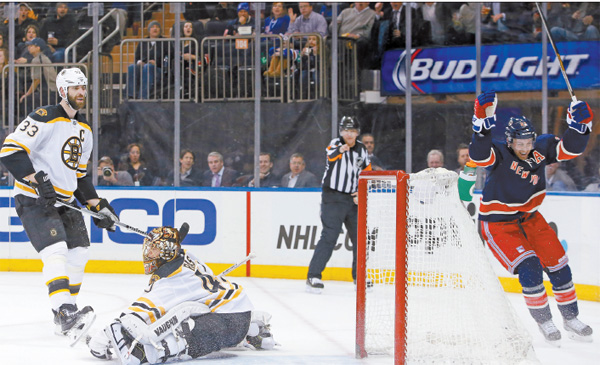 Cam Talbot was ready for this start for quite a while, well before a text message alerted him to be on call.

Now that he has another win under his belt, he could soon be in line for more action.

Talbot made 18 saves in place of the injured Henrik Lundqvist, Rick Nash had a goal and an assist, and Derek Stepan snapped a second-period tie to lift the New York Rangers to their third straight win, 3-2 over the Boston Bruins on Wednesday night.

Talbot, whose previous start was a 3-0 loss at Boston on Jan. 15, got the nod after Lundqvist was forced out by a neck injury caused when he was struck in the throat by a shot against Carolina on Saturday.

“I got a text last night saying maybe be ready, and then this morning when I got to the rink they gave me the go,’’ said Talbot (5-4-1). “I really didn’t have to do a whole lot. The guys did a great job in front of me.

‘’I was kind of hoping for a start at some point, not under these circumstances obviously, but I was ready for a start whenever it came.’’

Rangers Coach Alain Vigneault reiterated that Lundqvist is day to day, but if he isn’t able to play at Nashville on Saturday, Vigneault will turn back to Talbot.

Nash scored his NHL-leading 32nd goal in the first period, and Derick Brassard and Stepan scored in the second.

Milan Lucic and Patrice Bergeron had goals in the first for Boston, which was 8-1-1 in its previous 10. Tuukka Rask stopped 22 shots.

The Rangers regained the lead in the second.

With his back to the net, Chris Kreider sent the puck into the slot to Brassard for a shot past Rask at 6:41. It was Brassard’s 13th goal and second in seven games. New York made it 3-2 when Nash moved the puck to Stepan, who scored his ninth goal with 3:04 left.

Talbot had a much better second period, stopping all seven shots.

Things had started well for Talbot and the Rangers, who took a 1-0 lead before the Bruins recorded a shot.

Nash scored in the first period for the third straight game when he raced down left wing, cut in front of Rask, shifted the puck from forehand to backhand, and put it in at 5:50.

Talbot made his first save with 12:15 remaining when he stopped defenseman Adam McQuaid, drawing a big cheer from the crowd, and then made another solid stop just over 2 minutes later against Loui Eriksson.

But despite notching only five shots in the first period, the Bruins took a 2-1 lead into the intermission.

Lucic got it started just hours after he arrived in New York by scoring his 11th goal. The puck popped free from a scrum in the lower right corner of the Rangers end and came to Lucic in the slot for a hard drive that nestled into the top left corner at 13:37.

It was the second goal in three games for Lucic, who missed practice Tuesday because of the flu.

“We weren’t executing well enough to deny their speed,’’ Bergeron said. ‘’We didn’t get the start we wanted. We were expecting a tough game from a good team. That’s what we got, and we paid for it.’’