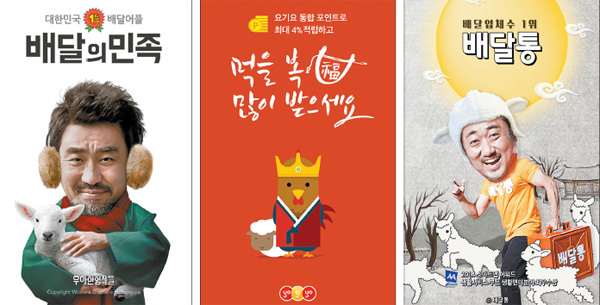 On the afternoon of Jan. 17, housewife Park Ji-yeon, 40, who lives in Sadang-dong, southern Seoul, received a text notification on her smartphone.

A message from the delivery app that Park installed on her smartphone popped up that read: “Hey, I’m a chicken. Did you know there is a soccer match today?”

The promotion was timed to match with the Korean national team’s Asian Cup game against Australia.

When she got home from work, Park told her husband and son, who were watching TV, that she would order chicken for dinner.

“I giggled when I saw the message. But I was actually a bit tired and was wondering whether I should cook or not. And the delivery app’s message came just at the right time,” Park said.

She also said that the app made it easy to order. In the past, the family would have to look through booklets containing phone numbers of all the restaurants in the area that deliver, or sort through vouchers stuck on their refrigerator. And they were never sure if the food would be a good value for their money.

However, with the delivery app, Park could browse reviews posted by other consumers to find the best restaurant and with a few clicks, she had ordered and paid.

Besides ease of use, another major reason for the rise in delivery apps is the increase in the number of single- or two-person households. Surveys have shown these smaller households use delivery services often and are less likely to cook.

Since the Baedaltong delivery app was launched in April 2010, other similar services have emerged. Three major apps, Baedal Minjok (Delivery Nation), Yogiyo and Baedaltong, account for 90 percent of the market.

Japanese venture capital company CyberAgent Ventures, which invested in Baedal Minjok, estimates that Korea’s delivery market is worth 12 trillion won ($11 billion), the third-largest in the world after the United States and EU.

But of those deliveries, only 1 trillion are made through apps, accounting for less than 10 percent of all deliveries. This shows that there is huge growth potential for Korea’s delivery apps.

Many other food delivery start-ups are also attracting venture capital firms, with tens of billions of won in investments made in recent years.

“The revenue of start-ups that do food delivery are not very big yet,” said an IT industry official. “However, in order to take the lead in the market, they are sparing no marketing cost, such as for TV commercials.”

The three most successful delivery apps are trying to stay ahead of their competition by using celebrities like Ryu Seung-yong, actress Park Shin-hye and actor Ma Dong-seong in their ads.

No. 2 player Yogiyo is a Korean branch of German start-up Delivery Hero, which has expanded to 20 countries since it was founded in 2010. Delivery Hero has invested 25.5 billion won in Yogiyo with foreign venture capitals.

Third-largest delivery app Baedaltong was acquired in December by Delivery Hero after its largest shareholder and CEO Kim Sang-hoon stepped down. Industry insiders said that there is a chance that the two delivery companies will merge.

As the delivery market grows, leading e-commerce companies such as Gmarket and Ticket Monster (Tmon) have also created their own delivery apps.

Gmarket joined with local start-up Npot to create a menu of the online mall’s food products, which the smaller company will then deliver.

“Ticket Monster will expand its business by working with large franchises such as BBQ Chicken and Nolbu,” said Daniel Shin, CEO of Ticket Monster.
BY CHOI YOUNG-JIN [kjy@joongang.co.kr]