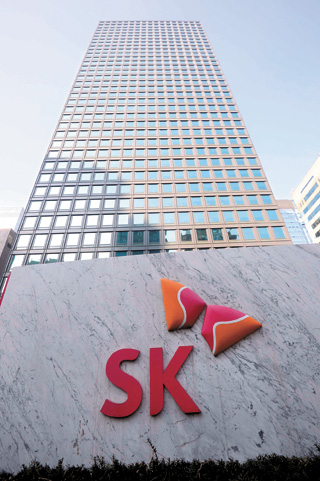 The nation’s leading oil refiner SK Innovation sank into the red last year for the first time in 37 years, the company said Thursday.

In its performance records for 2014, SK Innovation said it made 65.87 trillion won ($60.4 billion) in revenue with an operating loss of 224.1 billion won on a consolidated basis. Revenue decreased by 1.2 percent, or 793.8 billion won, while operating profit fell 1.6 trillion won year-on-year.

The refiner said the drops in profit and revenue were mainly due to declining global demand and a poor performance in the oil business, which was impacted by declining crude prices in the fourth quarter.

In its refining business, the company recorded an accumulated operating loss of 406 billion won in the first three quarters, but the amount snowballed to 991.9 billion won at the end of the fourth quarter due to declining margins. 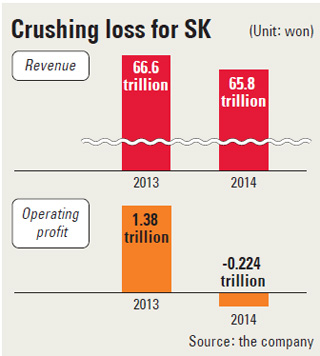 In SK Innovation’s chemical business, the sluggish market for its aromatic products including paraxylene, a chemical used to make plastic bottles and polyester, and the oil price drop left it with just 359.3 billion won in operating profit, down 57.4 percent from 2013.

Due to the poor performance, the company said it will not pay dividends to its shareholders for the first time since 1980.

The company paid out 3,200 won per ordinary share and 3,250 won for preferred stock last year.

The company said its figures would improve after it expanded its daily output to 77,000 barrels at its oil fields in the United States and Vietnam last year.

“We are not sure whether the business environment will get better this year, but we will try hard to overcome the situation by reducing unnecessary costs and by improving production efficiency at plants.”

Industry insiders said the company’s loss was significant because it is the nation’s biggest refiner, processing up to 800,000 barrels of oil per day, which is about 40 percent of the nation’s total output.

They predicted that oil refiner GS Caltex’s performance will be similar when it is announced next week. The company’s fourth-quarter operating loss could exceed 500 billion won, also due to the oil price drop, according to the industry.

The company recorded an operating loss of 14.4 billion won in the third quarter and revenue of 10.1 trillion won.

The company took on an operating loss of 164.6 billion won in its oil refining business only.