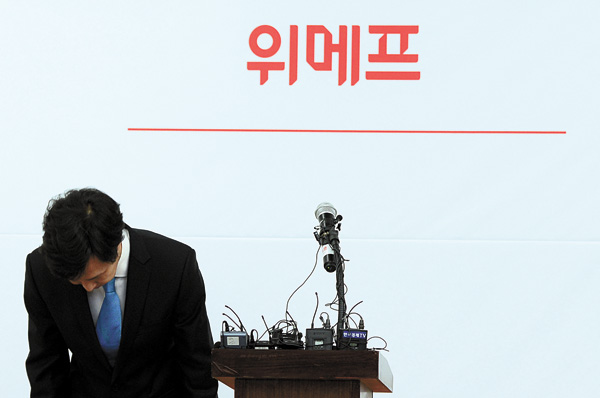 Park Eun-sang, CEO of WeMakePrice, issues a public apology at the company’s headquarters in Seoul. [NEWSIS]

Park Eun-sang, CEO of the social commerce company WeMakePrice, finally bowed his head in public and apologized for the company’s controversial hiring process.

“I apologize for creating such social controversy in the course of hiring sales employees,” said the 34-year-old Park. “I feel responsible, and I am ashamed and sorry.”

WeMakePrice was one of the nation’s top three social commerce companies. However, the company’s reputation was severely damaged after news outlets reported that the company treated job applicants unfairly during its recruitment process and didn’t actually hire any of its applicants.

The company started hiring sales employees in December. Eleven applicants were tested for two weeks, during which they were assigned to win contracts with stores, including restaurants. The applicants received 50,000 won ($46) a day.

Applicants said they were not candidates but trainees, and the people in charge gave them the false hope of saying that if they continued to bring in contracts, their employment would be guaranteed.

Although the company said no applicants met the company’s standard, it continued to receive business from the contracts the applicants secured during the two-week test.

This sparked nationwide anger toward the company for manipulating the vulnerable applicants. Sales of WeMakePrice started to tumble and finally the company tried to make amends by hiring all 11 applicants.

Although Park apologized, he said the public misunderstood the initial goal of the hiring process, which was to select a specialist.

“I have pointed to the moon, but the people only saw the hand that was pointing,” said Park. “I feel responsible for failing to properly deliver our intention of hiring a specialist.”

He said the initial goal was to create a regional marketing consulting group.

“We have set the bar for passing too high, and because it was too high not a single person was able to make it to the final round despite their best efforts,” he added.

“We should have thought carefully how the job applicants would feel when all of them were disqualified,” he said. “We will take this opportunity to continuously improve not only our hiring process, but also our personnel policy and corporate culture by listening more to the opinions of our employees as well as others outside of the company.”