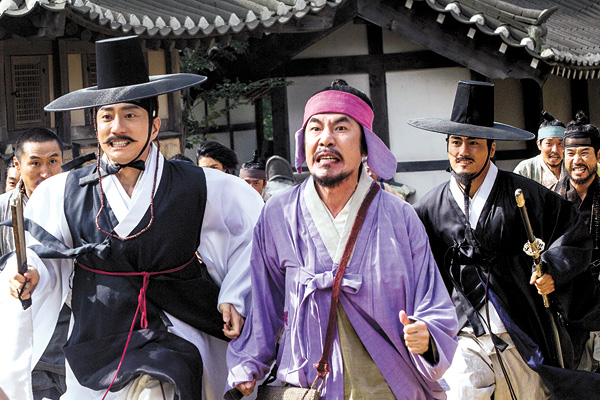 Detective Kim Min (Kim Myung-min), left, and his loyal companion Seo Pil (Oh Dal-su), the Joseon-era equivalent of Sherlock Holmes and Dr. Watson, run from a gang of bandits they put in jail years before.Provided by the distributor

“Detective K: Secret of the Lost Island” promises better chemistry and funnier performances from Kim and Seo than the popular original.

Director Kim Sok-yun reunited with Kim Myung-min and Oh Dal-su, who play the comical detective combo for the movie.

Actress Lee Yeon-hee joined the team to play the mysterious and seductive geisha Hisako who has the answers to solving many of the critical clues needed for the cases that arise in the film. 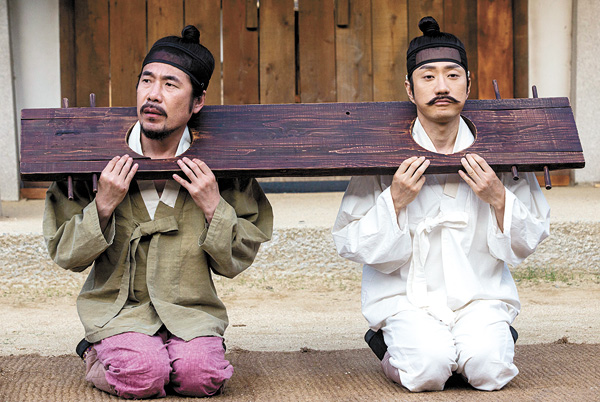 Seo, left, and Kim await punishment at a district office. Provided by the distributor

“Four years have passed since I filmed the first one,” said Kim Myung-min, 42, during a press conference on Monday at the Dongdaemun Megabox in central Seoul. “Instead of trying to change my character, I tried to maintain what people love about him.

“Detective K: Secret of the Lost Island” takes place during the rule of King Jeongjo (1752-1800), in which the trade of fake silver bullions was corrupting the economy.

When detective Kim, who was keeping his head down after being banished by the king to a deserted island, hears the news, he escapes in order to get to the bottom of the criminal activity.

The investigation goes smoothly and he and his companion Seo discover where the production of the fake silver is taking place.

But he is sidetracked by the beautiful Hisako during a critical moment, and the duo has to go back to the drawing board.

Actress Lee’s transformation into a seductive geisha complete with orange eye shadow and a vibrantly patterned kimono is a feast for the eyes.

“It was my first time acting in a kimono, so I had to put a lot of thought into the gestures and the way I spoke,” Lee said. “I used to think that period films were too much of a challenge for me, but now I think it suits me very well, in terms of my tone of voice and other factors.”

Compared to the first installment, the storyline has gotten more complex, as the film tries to deliver several cases at once with the interests of two or three people entangled within them.

While this adds more dimensions to the movie, the convoluted plot hinders the audience’s concentration and the dynamic between the detectives.

However, what remains unchanged is the flick’s comical factor.

The small quarrels and slapstick comedy that Kim and Seo engage in never fail to bring out a streak of laughter among viewers.

Kim Myung-min, who is familiar to the public for featuring in serious roles, said it is his partner Dal-su who enables him to loosen up.

“If I compare us to a pitcher and catcher, Oh is a perfect catcher. If I ever doubt about doing something, he reassures me to trust him and throw anything,” said Kim.

“He habitually said, ‘ I’m a sponge. I can handle anything.’ Then I do [my part], which he absorbs completely and throws back. It was a relative thing. I was able to pull off a gag because Oh was my partner.”

The lighthearted comedy that is fit for the coming Lunar New Year holidays open in local theater on Feb. 11.