Director aims to entice with ‘Lust’

Director aims to entice with ‘Lust’ 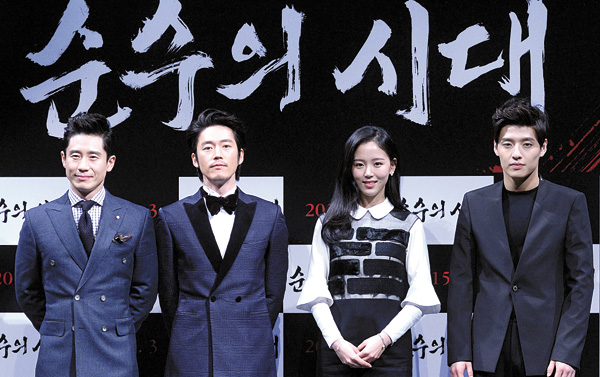 The cast for “Empire of Lust” pose for a photo at a press event in Apgujeong-dong, southern Seoul, on Tuesday. From left, Shin Ha-kyun, Jang Hyuk, Kang Han-na and Kang Ha-neul. [NEWSIS]

The Joseon Dynasty (1392-1910) has always been a popular period of inspiration for Korean producers and filmmakers because the juicy affairs it is known for are open to all sorts of reinterpretation.

Director Ahn Sang-hoon’s “Empire of Lust” is indicative of this. In the movie, the “Blind” (2011) filmmaker reproduced a deadly power struggle from the seventh year of Joseon when King Taejo refused to nominate his son, Yi Bang-won, as his successor.

“The missing and suspicious records between the latter part of Goryeo and early Joseon was what aroused my interest, such as those regarding the Yi Bang-won Rebellion and the death of Jeong Mong-joo,” said Ahn at a press conference on Tuesday at Apgujeong CGV, southern Seoul.

“And according to what I’ve studied, Yi Bang-won, who reflects both aspects of the literati and the militants [of the time], differed a lot from his current pervasive image. In the process of filling the missing parts in, I came up with some imaginary characters and plotlines,”

Yi Bang-won is played by Jang Hyuk, a regular in historical films who explained that he focused on the “emotional and individual aspect” of his role.

Two fictional characters were added to the plot - Min-jae, a faithful general, and his conniving son Jin - both of whom cause a major love triangle and power struggle.

Min-jae is played by maverick actor Shin Ha-kyun who is attempting his first period film role in 18 years. Min-jae holds a great deal of power in his hands, but he achieved none of it on its own.

“I’ve come across many historical scripts, but this came into my attention for its heavy treatment of the emotions of desire and love,” said Shin.

“I found my character Min-jae pitiful, being trapped in the desires of others.”

The fact that he isn’t recognized by his own father pushes him into a dark world full of women and alcohol.

When asked about trying out for a role as an antagonist after gaining fame for a good-natured image, Kang said,

“I was taught that there is no evil cause behind every bad character. In that bad guy’s perspective, the things he does are for rightful and just reasons. I played my character with that in mind.”

The 26-year-old actor also said that he had to engaged in many risque scenes with new actress Kang Han-na, which he said were the most “memorable” moments while filming.

The film hasn’t received a rating yet, but insiders expect it to be 19 or over.

“I considered the flow of emotions as the most important part. Love scenes were considered necessary and natural when depicting a love between a man and a woman, but I didn’t emphasize them either,” the director said.