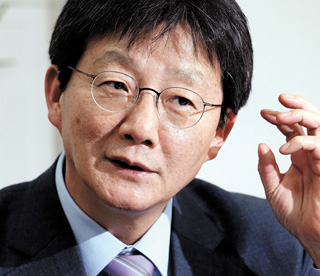 Yoo Seong-min, the newly elected floor leader of the ruling Saenuri Party, said raising the corporate tax rate could be an option if the ruling party and opposition come to a more general agreement on tax increases.

Yoo’s statement was a direct contradiction of the administration’s vow of no tax increases. But it follows an embarrassing increase in income tax bills for middle-class workers for 2014, which the administration had promised wouldn’t happen.

“If the government leaves the corporate tax intact while increasing income taxes, the government has no reasonable ground to persuade ordinary people to contribute more to tax revenues [to cover rising welfare spending],” said Yoo in an interview with the JoongAng Ilbo Wednesday at his National Assembly office, a day after he was elected to the ruling party’s second most powerful position.

His openness to the restoration of a 25 percent corporate tax rate for companies with taxable incomes exceeding 20 billion won ($18 million), which was slashed to 22 percent by the business-friendly Lee Myung-bak government, raises the prospect of tensions between the party and the Blue House, which is still determined to not raise taxes.

Yoo, who has a doctoral degree in economics from the University of Wisconsin, said the National Assembly must reach a consensus on whether the country should increase the scope of its welfare benefits accompanied by higher taxes or cut welfare spending to keep taxes low before a general election in April 2016.

“People now know there is no such thing as a free lunch,” said the three-term lawmaker, who hails from Daegu.

On the Park Geun-hye government’s economic policy, which some critics blame for doing little to none to address a widening income gap in Korea, Yoo acknowledged that the government’s policies so far have fallen short of addressing the polarization.

Yoo’s honest remarks on the performance of the Park government reflect his pledge to put the Saenuri back at the center of national policy making, and a promise to be assertive in his demands on the Blue House.

The 57-year-old lawmaker said he called the president Monday night after his election.

“She asked for my cooperation in coordinating an effective relationship among the Blue House, the Saenuri and government branches. And I told her she didn’t have to worry,” said Yoo.

Yoo was known as one of the first batch of lawmakers loyal to Park when she was a lawmaker.

But he is also said to have strayed from the circle of lawmakers close to her after he made a series of critical remarks over the way she handled national affairs.

“I never thought of myself as a non-mainstream lawmaker outside of the pro-Park faction,” he said in the interview. “I supported her during her confrontation with the Lee Myung-bak government over the revision of the Sejong City project. … People may think [I have a strained relationship with Park] because we had our differences of opinion, which were exposed to the public from the lack of opportunities to communicate with each other.”

On speculation that the ruling party has been excluded from the presidential office’s policy-making process, despite three cabinet members coming from the party, Yoo said, “I don’t think those cabinets members have much authority that go beyond ministerial jobs. So far, it seems that the Blue House holds a discussion after it already has decided what action to take, treating those discussions as formalities.”

He stressed that the Saenuri will “need to take part in the policy-making process and have the Blue House consult with us before making a policy directive from now on.”

On the economic policy driven by Finance Minister Choi Kyung-hwan, the former Saenuri floor leader, he said pumping money into a short-term stimulus program in a stagnant economy won’t do much.

“I have nothing against the Choi team’s efforts to revive the economy. But if you want to have tangible outcomes from your short-term stimulus package, you need to have a cycle of reviving the economy and having the economy grow, which leads to increased tax revenues,” said the former economist.

“But in the current state of an economy mired in low growth for years, pumping money into the market will have little impact on jump-starting the economy. The government must pay heed to worries raised by economic experts that money pumped into the market under short-term stimulus programs will go down the drain when an economy is projected to grow no more than 3 percent a year.”