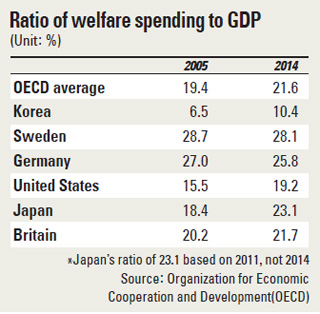 Korea’s ratio of welfare spending to gross domestic product has jumped 3.9 percentage points over the past decade, the widest leap among member countries in the Organization for Economic Cooperation and Development (OECD), data released Thursday showed.

Four countries among the 32 member countries have seen drops, including Germany, Sweden, Hungary and Poland.

“Expenditure on welfare is increasing fast, but conditions are still very poor,” said Choi Byung-ho, head of the Korea Institute for Health and Social Affairs. The speed of the increase has actually created flaws in the system, he said.

Although Thursday’s data indicated that Korea has increasingly put more money into welfare, the country still ranked at the very bottom of the list.

Its ratio, 10.4 percent, was less than half the OECD’s average of 21.6 percent, and roughly one-third of the countries ranked highest - France at 31.9 percent and Finland at 31 percent.

Estonia, which ranked a single slot higher than Korea, showed a percentage of 16.3, while that of the United States was 19.2 at No. 22.

Among the 34 member countries, Chile, Israel, Japan, Mexico, New Zealand and Turkey were excluded from the 2014 report.

In 2013, Korea was listed second from bottom, above Chile.

The ratio of welfare spending to GDP in Korea has inched up from 4.8 percent in 2000 to 9 percent in 2010 and 10.2 percent in 2013, due in part to recent welfare initiatives like the free day care system for infants to 2-year-olds, which was implemented in 2012.

Thursday’s data is expected to provide fresh fodder for the main opposition New Politics Alliance for Democracy (NPAD) and the ruling Saenuri leadership, which have recently called on the Park Geun-hye administration to review its campaign promise of “no tax increases” even though welfare spending has jumped

Saenuri Chairman Kim Moo-sung said in a lecture delivered to governmental dignitaries and business leaders Thursday that the country must widen its welfare net and that the process requires increasing tax.

Kim, however, was quick to add in the lecture hosted by the Korea Employers Foundation that the increase “should be based on public consent if it’s a European-style welfare system the people are asking for” and that the hikes shouldn’t be too high that locals “fall into moral laxity.”

Woo Yoon-keun, floor leader of the NPAD, also said in a local radio show Thursday that he agrees with the necessity of a tax hike, but that the rich must be targeted for the extra tax payments.