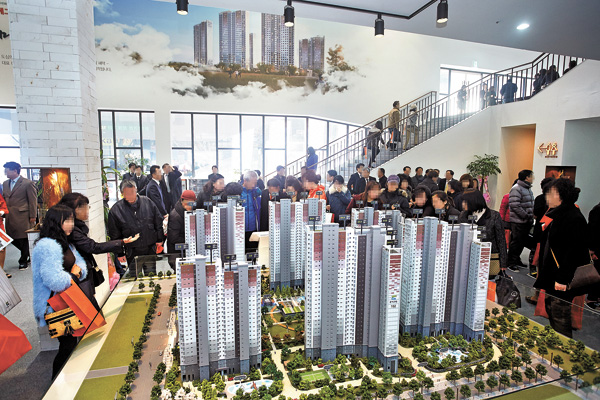 Songdo resident Mr. Kim submitted an application at the end of January in hopes of grabbing a pre-construction unit at Hoban Vertium 2 that will be built in Songdo, Incheon. However, his application was rejected.

Kim’s hopes were not unfounded. He was a Class 1 applicant because he already has a house and has had an adequate sum in his bank accounts for more than two years. Above all, he thought there would be little competition since pre-construction units went unsold at two apartment complexes in the neighborhood last year.

Unfortunately, there were three offers for each unit at Hoban Vertium 2.

“I was quite surprised at the number of visitors, when I was at the model house before applying,” said Kim. “This year, winning a pre-construction house already doesn’t seem to be easy.” 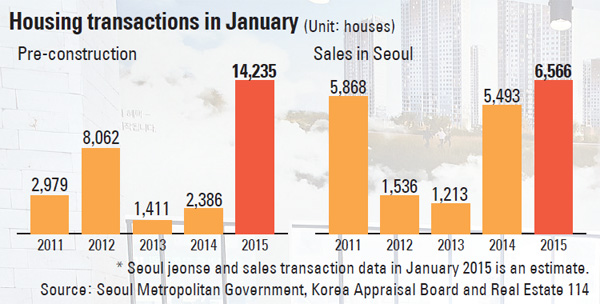 Ms. Lee, a jeonse resident in Seoul, recently decided to buy a house instead of being pushed to move every two years.

Lee visited a nearby realtor’s office at the beginning of the year, seeking another jeonse house, a two-year contract rent house on a lump-sum deposit, she could move to April.

She already had a house in mind, about 59 square meters (635 square feet) located in Gangil-dong, southeastern Seoul. But she was startled at the jeonse price, which jumped 30 million won ($27,600) in a month. On the spot, she decided to buy the house because jeonse was almost as much as the sale price.

“Thanks to the low interest rates these days, I don’t think getting more loans to actually buy this house will be much of a threat to my household budget,” Lee said.

In the chill of January, Korea’s overall housing market heated up ahead of government deregulation measures.

Three major pieces of real estate legislation that barely passed the National Assembly at the end of last year and have not yet taken effect have been the biggest reasons for the January surge in housing sales.

The bills will raise the cap on pre-construction prices of privately owned housing, lift the price ceiling for apartments built on privately owned land and allow buildings to be reconstructed sooner.

According to Real Estate 114, a total of 14,235 apartments were pre-sold nationwide in January alone, a fivefold increase from the previous year.

Of 18 apartment complexes planned nationwide, nine saw their pre-sales sell out early in January, compared to one out of 11 complexes in the same month last year.

At the end of January, about 21,700 people classified as Class 1 pre-sales applicants bid for the 117 households at Hanwha E&C’s Gaeum Dream apartment complex that will be built in Changwon, South Gyeongsang. There were 185 applicants for each available unit.

Meanwhile, the jeonse market is still struggling due to a shortage of available houses, as many house owners switch to monthly rents due to longstanding low interest rates.

Of 5,500 units at Ricenz Apartments in Jamsil-dong, southeastern Seoul, only two came out on jeonse. Both houses are relatively large at 59 and 124 square meters, while small houses are barely seen on the market.

The fact that more and more current jeonse tenants’ decide to renew their contracts also squeezes the supply.

“About three of five jeonse tenants stay where they are, because the landlords call for higher deposits whether they move or not. It is natural that tenants want to save several million won on moving and realtor commissions,” said Yoon Geun-pyo, a realtor in Sanggye-dong, northeastern Seoul.

The jeonse crisis also is fueling sales transactions, along with the government’s recent decision to further lower loan interest rates to the 1 percent range.

“The difference between sales and jeonse prices is only 20 to 30 percent,” said Kim Bok-hee, a realtor specializing in Dunchon-dong, southeastern Seoul. “Such a small price difference leads more jeonse dwellers to purchase a house.”

“The actual sales prices so far haven’t really risen much, even while the pre-construction sale market gets hotter and jeonse prices rise,” said Park Won-gap, head researcher for real estate at KB Kookmin Bank. “This is because these transactions are mainly led by owner occupants, while not much investing is going on.”