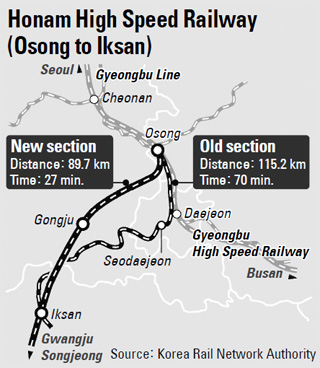 Korea’s transport authority announced on Thursday that faster bullet train services set to start running on a new high-speed track in the southwestern part of the country in April will not pass through central metropolis of Daejeon.

In a statement released late on Thursday night, the Ministry of Land, Infrastructure and Transport said all Korea Train Express (KTX) services running on the new Honam High Speed Railway, which will take passengers from Seoul to Gwangju in just 93 minutes, won’t be available for users at Seodaejeon Station.

Current KTX rides from the capital to Gwangju, located 330 kilometers (205 miles) southwest, take approximately 2.5 hours on conventional tracks. On the new railway, however, trains that currently run 150 kilometers per hour will be able to double their speed.

Construction for the high-speed track began in 2009, and the state-run project - worth more than 8 trillion won ($7.3 billion) - was widely welcomed by the people in North and South Jeolla, who were excited by the prospect that halved transportation time would boost the regional economy.

But those warm sentiments froze just before the new track was to open next month, when the Korea Railway Corporation (Korail), the operator of the bullet trains, announced last month that 18 of the 82 services planned to run on the Honam High Speed Railway every day would pass through Seodaejeon Station on the conventional track.

Korail’s decision was based on data that 30 percent of the passengers using the southwestern portion of the country’s high-speed railway were from that station in Daejeon.

The announcement, however, was immediately denounced by policy makers representing the Jeolla region, who argued that the extra 43 minutes from Seoul’s Yongsan Station to Gwangju Songjeong Station, if stopping midway at Seodaejeon Station, will inconvenience passengers.

Added to the fact that it was ditching its plan to run the new bullet trains through Daejeon, the Transport Ministry said in its press release that only 68 KTX rides will be available on the new Honam High Speed Railway, a change from the previous 82.