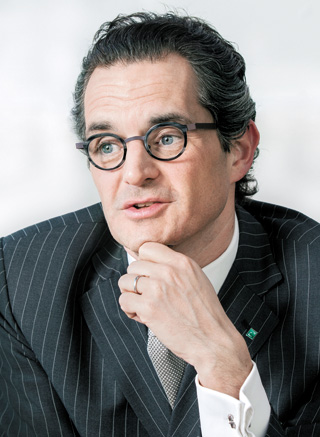 Joris Dierckx, country head of BNP Paribas, speaks in an interview on Feb. 4 in his office at State Tower Namsan in central Seoul. Photo by Park Sang-moon

Joris Dierckx, country head of BNP Paribas Korea, made a confident forecast that the Korean central bank will cut its benchmark interest rate twice more, bringing it down to 1.5 percent by the end of this year. And he dismissed growing concerns about deflation in the Korean economy.

“We think it will be lowered twice,” Dierckx said in an interview with the Korea JoongAng Daily on Feb. 4. “Based on our lowered inflation expectations, we are expecting fairly soon [it will drop by] by 25 basis points and probably, because we expect all prices will remain low and to strengthen domestic demand, there will be another cut towards the end of the year.”

The Belgian financial expert, who has been in Korea for three years leading the Seoul subsidiary of the largest financial institution in France, has been watching the changing macroeconomic conditions in the Korean economy and global economies.

“We’re not worried about deflation in Seoul,” he emphasized. “Our inflation expectation by our fixed income strategist has lowered expectations for headline inflation from 1.5 percent to 1.2 percent [for Korea]. We do expect inflation to be very low this year, very much below the Bank of Korea’s expectation, which is 2 percent. So we believe it will be lower because of the impact of mostly low oil prices and possibly some weakness in consumption.

However, we see little scope for a further decline in oil price or other commodities. Some prices, such as health care, have gone up above recent trends, so there is a balance between rising and falling prices. We do not expect core inflation to drop below 2 percent this year. ”

As for Seoul’s goal to become an international financial hub, Dierckx said there were geographical, regulatory and transaction-size problems.

“Geography decides flows of goods, so it’s much easier for Hong Kong or Singapore to be a financial hub, because there is more stuff going through there,” he said. “We see that the Korean market is still very constrained.”

He said he supports the Korean government’s efforts to promote Busan as a hub for marine finance.

“[Having] certain centers of excellence, that’s important for the development of the financial sector and I believe that shipbuilding and shipping is a perfect example, and so the initiative of the government to concentrate all its financing units in Busan, where all these Korean shipbuilding companies are concentrated, makes a lot of sense,” he said. “Because it will create that center of excellence, you have it on the hard economy side; you’ll have the financing and they can be brought together.”

Q. How do you evaluate the latest quantitative easing by the European Central Bank and its impact on the Korean economy and Korean companies?

A. Because there were positive surprises both in the scale and the open-ended nature, the amount was actually bigger than what was anticipated. The anticipated amount was [that the bank would] purchase 50 billion euros [$57.3 billion) per year but they actually committed to 63 billion euros per month, bringing the total to 900 billion euros until 2016. Well it will obviously increase liquidity in the market; interest rates are expected to remain low. It’s also expected that it will not strengthen the euro, so the euro will stay weak relative to stronger currencies such as the dollar. So it will help investments and exports so it makes the euro more competitive.

I don’t think there will be any direct impact on the operation of Korean companies in Europe. Where it will have an indirect impact is in the Korean economy because of its exposure to exports. It’s very dependent on the large economies, the large global economies, Japan, China, the U.S. and also Europe. So … quantitative easing will reinvigorate growth in Europe, will put the eurozone back on track for growth, and Korean companies will increase their market share in Europe. In a growing economy, of course they will have a double advantage of increasing their market share and benefiting from the growing economy.

Do you also see expect some positive impacts from a possible U.S. interest rate hike in the coming months?

We think really it will take a while before [a rate hike] actually happens, because in our view, the U.S. Federal Reserve will be very careful in doing that. When it happens it will be an indicator that growth in the U.S. is strong, deep and sustainable. In that sense, it will be good for Korean companies because all the large chaebol have important operations in the U.S., so they are less exposed to exchange rate fluctuations. Plus, the dollar will strengthen, so their purchasing power will increase. So again, for an exporting economy such as Korea, it will be good news.

What about possible capital outflows from the Korean market and other emerging economies when the U.S. interest rate is up?

We don’t see Korea as being linked to emerging economies … When there was a bit of an emerging market turbulence in India and Asia [in 2013], we saw very different behavior in Korean markets. And there were actually capital inflows into Korea. So money actually came out of emerging markets in India, Indonesia etcetera, and came into Korea at the time.

So again, of course there is a danger; there is a possibility that … there may be a move of available cash from lower interest rate environments in Korea to the U.S., it’s possible. That being said, there is a surplus of capital in the Korean economy so there is surplus liquidity in the Korean economy so we don’t believe that would be a problem. All the macroeconomic fiscal fundamentals of Korea are very, very strong. It is a double A rated country now, so there is no reason to suspect that will be changed fundamentally any time soon.

It has been nearly 40 years since BNP Paribas started its operations in Seoul. What has been the role of your institution?

I believe that the role of foreign banks in general has really changed. When the bank branch was opened here, the role of foreign banks was to import capital into the Korean economy to finance economic growth that was undertaken by the government. That’s been a trend for a very long time. That was both financing for imports of raw materials as well as providing financing for capital expenditures either directly to companies through lending to the Korean banking system or by providing access to offshore capital markets for Korean borrowers, corporate or institutional.

And that trend is now very much shifting. Since the 1997 crisis and the 2008, 2009 crises, there’s been a huge development in both the financial strength of Korean corporations, corporate governance and the strength of the banking sector, the financial sector in Korea as a whole. Also, there has been a lot of capital accumulation, and so there is now an excess of capital in the Korean economy.

So the role of foreign banks is shifting to providing investment opportunities for that capital. Bringing our product know-how on shore, for BNP Paribas, that’s more related to the structure of derivatives and structure of investment notes, so in the bank we structured derivatives through the securities company.

What should Seoul do to reach its goal of becoming an international financial hub?

First, there is a geographical reality, which was the same for Tokyo. Even when Tokyo was really booming and was the second-largest capital market in the world, it never really became a global financial center because of its geography. Geography decides flows of goods, so it’s much easier for Hong Kong or Singapore to be a financial hub, because there is more stuff going through there.

But I think what [Seoul] could do is exploit its strength in the underlying economy, the shipping industry, for example. Another thing is to stimulate more market behavior. In terms of implementation of regulations, there are probably things to be done. And also, with certain things, just let the market do its job. Where we see a big difference, for example, is volumes of derivatives transactions in foreign exchange - we see that the Korean market is still very constrained. So the size of Korea’s capital flow and trade flow, the current account, excessive volumes for foreign exchange are much lower in absolute terms certainly to the relative size of the economy. I don’t think it is right to compare Korea to Hong Kong or Singapore, because of geography and their role in global trade.